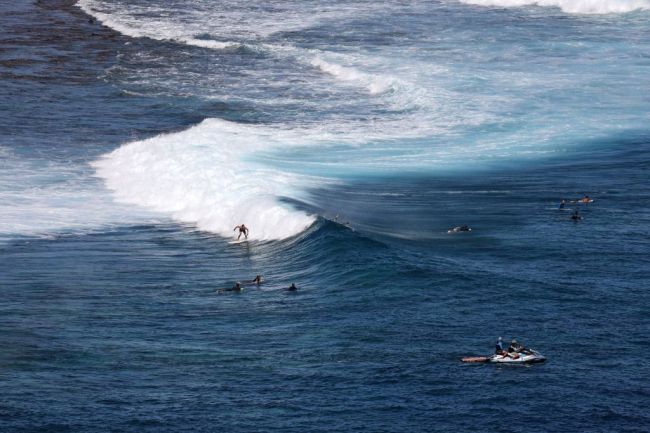 We’ve all been wired to consider sharks as a terrifying, flesh-eating human eaters, myself included. In reality, as you’ve likely heard time and time again on Shark Week each summer, they’re not actively interested in us. The massive predator fish sometimes do act curious about people in the water, but it’s typically because of low light, or confusion as to what we actually are— mistaking us for a meal.

To put it into context, sharks have been around for more than 400 million years, while humans only arrived 300,000 years ago. So, speaking in terms of evolution, we’re still a fairly new concept to the top-of-the-food-chain fish, and shark attacks are fairly uncommon for how often they interact in close capacity to swimmers, surfers, etc.

This incredible drone footage from Carlos Gauna provides a great, insane look at that notion. Guana, known through his YouTube channel as ‘The Malibu Artist’ is part of a group of researchers and videographers who work together and use drones to study great white shark behavior. Their goal is to present the prehistoric creatures in a more realistic light than the shows and moves that have trained us to see them as daunting dangers.

His most recent videos are absolutely wild. Gauna traveled to Southern California and pulled up to a beach with around 10/15 surfers out in the ocean trying to get on a wave. Among them, swimming around right in the middle of the pack, is a great white shark.

They seemingly have no idea that it’s there and the footage gets even crazier around the 2:55 mark. One of the surfers is catching up to a wave and paddles right over the caudal (back) fin, even appearing to slap the shark!!!!

Another one of Guana’s most recent videos is equally as close of an encounter. The water was a bit cloudy, so it was hard to see below the surface. The footage shows a surfer straight chilling out in the water. Not but three feet away, a 9/10-foot great white is lurking at his feet. Guana spoke to the surfer after filming the unbelievable moment and he had no idea that there was a shark in the water, let alone practically sucking on his toes. Uninterested, the big fella keeps swimming and continues on with its day.

Perhaps the craziest part of these two close encounters is that they are not uncommon. The young sharks’ presence in the surf, nearer to the shore is completely normal and happening all of the time. Not just at this particular beach, but all around the globe, and particularly along the coast of Southern California. We just haven’t been able to see them until the relatively recent invention of drones. That’s nuts.