A Shark Researcher Explains What It Means To Research ‘Lost Sharks’ 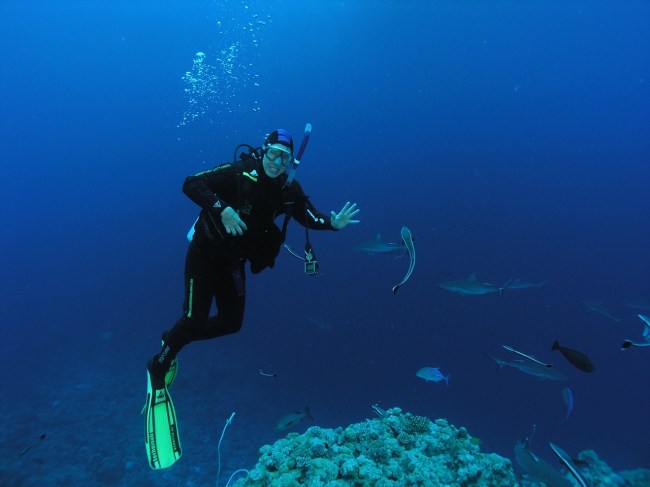 Editor’s Note: Welcome to Forrest and Friends, a new series we’re rolling out here at BroBible about the wildlife researchers and scientists who work with our main man, Forrest Galante.

Dr. David A. Ebert is the program direction at the Pacific Shark Research Center Moss Landing, California. He’s become well-known in shark scientific circles as the “the Lost Shark Guy” because of his groundbreaking work to discover unknown species of sharks. It’s work that has taken Ebert to over six continents and over 30 countries, where he has discovered and named over 40 new shark species.

Dave Ebert is a regular researcher on Discovery Channel’s Shark Week and the series Alien Sharks.

What’s the focus point of your research?

My research focuses on searching for what I call the “Lost Sharks” – those species that are overlooked and mostly forgotten by the public in favor of the more charismatic and iconic species such as the Great White Shark.

What’s the most exciting discovery that you’ve made?

My most exciting discovery is the next new or lost shark I find, the next great expedition I go on to search for something that either new to science or hasn’t been seen in years. It’s about the journey, the next challenge, and moving forward, it’s where I find inspiration and it’s what motivates me. It’s the thrill of the hunt!

For example, Discovery Channel came to me a few years ago about doing an “Alien Sharks” program and asked what shark would I like to go find? I told them I knew a place where I could find a Megamouth shark, a species that was one of the most spectacular new sharks discovered in the 20th Ccentury. They thought I was nuts, and to be candid no one would have seriously funded me to go find one, but TV, programs like Shark Week will support such crazy ideas.

The interesting part of the story is that they never expected me to actually find one and they told me later that they figured there was maybe a 5% chance I would get one. However, with me if I’m going out in the field to find something then damn it I’m going to find it if it still exists. And you know what?

We caught a Megamouth shark for the program, which was pretty damn cool since no one had ever done that before.

So we tagged it and release it.

Similarly, when Forrest contacted me about the current program he said the network wanted him to find two species. So he asked me if I knew a place where we could find two species? I replied something along the lines of how about looking for five species? We settled on four, which was fine with me because even one of these lost sharks that we went in search of would be freaking cool to get, but of course the goal was to get all four. 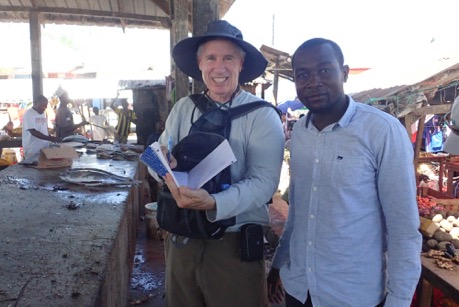 And how did your previous research lead to that moment?

I could write a lengthy story or spend an hour explaining how my 35+ years of preparation and research leads me to that moment when I find something new or I can just tell you I’ve spent 35+ years preparing for that moment. As with anything it’s all about preparation, learning what I can about a species, where it occurs, who locally I might ask, and then there is always a bit of luck that the weather will cooperate, there will not be any civil unrest, or disease outbreaks. I mention these elements since by definition, lost sharks are hard to find and to get to them, I need to travel to places you sometimes can’t find on a map. And to add to the frustration, these places are often impoverished, full of disease, and offer few creature comforts. Many are also politically unstable with armed conflict nearby. Each of these factors contributes to unexpected challenges and can make the work tough, but if it were easy everyone would be doing it!

However, once I get on site, I’m on a mission to discover something nobody has ever seen. It can get a little discouraging, frustrating, exhaustive! But it can also be the most exhilarating thing you will experience.

Any interesting encounters from your work in the field – with other animals or humans?

Wow, this actually is the basis of a book I’m writing on my journey and the interesting people I’ve met and the amazing wildlife I have encountered. I’m from Prunedale, California and growing up the idea of traveling out into the world to far off places was not something on everyone’s mind. And what an adventure I’ve had!

A 26 I won a National Science Foundation award to attend an international conference in Japan. I was one of only 12 people awarded. And it was there that I dined with the Emperor of Japan at the royal palace in Tokyo; most people don’t know that the Emperor is an accomplished ichthyologist and had invited us to the palace for dinner. After Japan I moved to South Africa where I lived for four years and was in Cape Town the day Nelson Mandela was released from prion and heard him speak at the Grand Parade.

However, what I have found to be the most rewarding experiences are the towns and villages I’ve explored and the local fishers I’ve met who helped inform and educate me where I might discover some new or rare sharks. It’s amazing how someone with little formal education, but generations of traditional knowledge can explain to me the sea conditions, time of day, location and where I can find these Lost Sharks. I mean they know their oceanography as well as any Ph.D. oceanographer. It’s local traditional knowledge where I often get my leads often in searching for Lost Sharks.

When I speak to audiences I usually close by saying that “I went to look for Lost Sharks, but what I found so much more.”

And what I found isn’t measured solely by the new species I’ve discovered, but in the people I’ve met, places I’ve been, and the wildlife I’ve seen.

Life really is about the journey.

How did you get interested in this particular focus point?

Well, my folks gave me a book on sharks when I was about 5 years old and I just thought these were the most amazing animals I had ever seen in my young life. Now most kids grow out of the shark and dinosaur phase of life, but not me. I decided when I was about 10 that I was going to travel the world and look for sharks. I have always had the mindset of an explorer and the sense of discovery was a big motivator. I am someone who has always taken the road less traveled and metaphorically that inherently means doing something few others are doing. Doing yet another study to put a tag on a white shark is frankly boring, but searching for and finding Lost Sharks is something few have done.

What do you think are some of the broader, theoretical implications of your research?

I’m not sure of the theoretical implications, but the species I’m discovering, whether new to science or long since lost, and possibly extinct, these are the proverbial canaries in the coal mine, they can tell you more about the environment around us than the white shark. Yet trying to convince people that a shark you can hold in your hand and gets no bigger is important is not an easy hurdle.

When I started in this field back in the 1980s most books said there were about 250 species of sharks. Now today we know of about 550 shark species! Think about that, we have more than doubled the number of known shark species in the past 35 years and I see no signs of it slowing down.

I use these numbers to emphasize to young people that there is still a lot to be discovered out there, we have barely scratched the surface of what we know. I’m still finding new species after all these years. In fact most of the new species have come in the past 15 years! 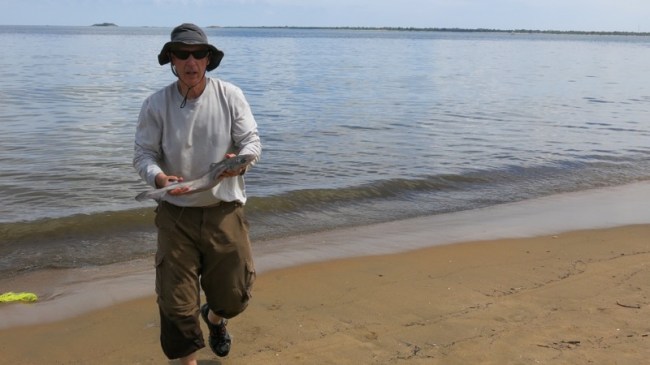 How did you enjoy working with Forrest on Extinct or Alive?

I had a great time with Forrest and the crew on the program! The coolest thing about working with Forrest is that he is a “fellow traveler” in the sense we are both searching for species that maybe extinct or in my case I’m looking for new species no one has ever seen in the outside world!

So to be able to say hey let’s go look for some lost sharks in some far off part of the world and just go do it, wow, it was great! I mean to work with fellow travelers like Forrest to go search for lost species was terrific! Hopefully, we convey that excitement to the audience when the program airs.

What was your favorite moment you had while in the field with Forrest?

Finding Lost Sharks is the obvious favorite moment, but you’ll have to wait and watch the program to see if we were successful. However, to pick another favorite moment I would have to go with a day we when out to the Protea Bank and the seas were about 10 feet with a 6 second swell period. I looked over at Forrest as the boat is bouncing around and commented to him about students when applying to grad school to study sharks they are usually thinking about some tropical location with crystal clear waters and large sharks gently swimming around. They usually do not envision 10-foot seas, being miles off the coast, trying to find a suitable reef to dive and have a skipper named Spike chain-smoking the whole time telling us it’s fine we can dive. A classic splice of live moment!

What was the best part of being affiliated with Extinct or Alive?

As I said, working with “fellow travelers” searching for lost species, Extinct or Alive, on this project was the best part.

So what’s next for your research?

Some of these species may even be extinct now since they have not been seen in 25 years or more. On the brighter side I may have discovered a couple of new species so far during the project. These are species that may have continued to elude being discovered if I had not been out looking known, but possibly extinct species in the group.