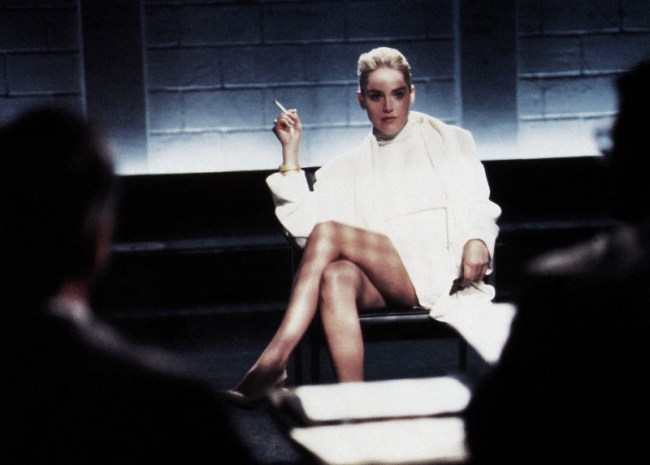 In the history of film, there are a rare few moments, characters, quotes, and images that transcend the very movie they’re in. Aspects of a film that are so popular, even people who haven’t actually seen the film are familiar with them. “Frankly, my dear, I don’t give a damn” in Gone with the Wind. “I’ll be back” in The Terminator and the Delorean in Back to the Future. Heath Ledger’s Joker in The Dark Knight. The list goes on and on. Sharon Stone uncrossing her legs in Basic Instinct is one of those moments.

In an excerpt released by Vanity Fair, Stone says that Verhoeven told her she had to take off her underwear because it was causing a reflection that was blinding the camera and that she did not know the unedited footage would be in the film until she saw it in a screening with a room full of agents and lawyers.

After we shot Basic Instinct, I got called in to see it. Not on my own with the director, as one would anticipate, given the situation that has given us all pause, so to speak, but with a room full of agents and lawyers, most of whom had nothing to do with the project. That was how I saw my vagina-shot for the first time, long after I’d been told, “We can’t see anything—I just need you to remove your panties, as the white is reflecting the light, so we know you have panties on.” Yes, there have been many points of view on this topic, but since I’m the one with the vagina in question, let me say: The other points of view are bullshit.

Now, here is the issue. It didn’t matter anymore. It was me and my parts up there. I had decisions to make. I went to the projection booth, slapped Paul across the face, left, went to my car, and called my lawyer, Marty Singer. Marty told me that they could not release this film as it was. That I could get an injunction. [via Vanity Fair]

Ultimately, though, Stone says that it was her decision to allow the scene to be in the film, as she “fought” for the part and felt it was right for the character:

Well, that was my first thought. Then I thought some more. What if I were the director? What if I had gotten that shot? What if I had gotten it on purpose? Or by accident? What if it just existed? That was a lot to think about. I knew what film I was doing. For heaven’s sake, I fought for that part, and all that time, only this director had stood up for me. I had to find some way to become objective.

But I did have choices. So I thought and thought and I chose to allow this scene in the film. Why? Because it was correct for the film and for the character; and because, after all, I did it.