Sheriff Chris Swanson Ordered Officers To Put Down Their Batons And Marched Side-By-Side With Protesters In Flint, Michigan 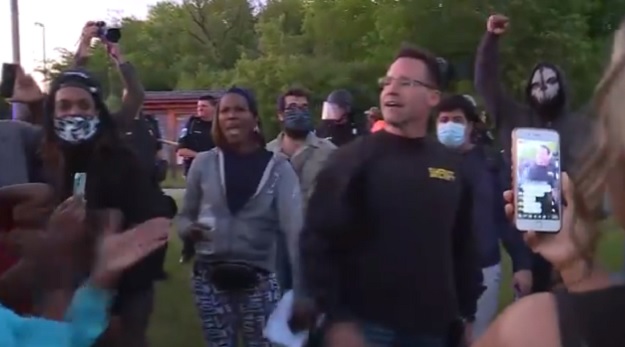 On Saturday night as many cities in the nation saw protests turn violent, Genesee County Sheriff Chris Swanson marched side by side with the peaceful protesters in Flint Michigan.

In a gesture of goodwill, Swanson asked that his officers put down their batons and joined the crowd that was marching in Flint in honor of George Floyd, the 46-year-old black man who died after police officer Derek Chauvin knelt on his neck during an arrest in Minneapolis.

After more than two hours, the march was led to the Flint Township Police Department, where protesters were met with a line of Flint Township officers and Genesee County Sheriff’s deputies wearing riot gear and holding batons.

Protesters initially sat down to show their peace, and after conversations sparked between police and protesters, common ground was found. High-fives, hugs and fist bumps were exchanged.

Genesee County Sheriff Chris Swanson took his helmet off and put his baton on the ground as a sign of peace.

Swanson and other Flint-area police officers ultimately joined the march, which continued back past the Genesee Valley Mall onto Miller Road to the Target parking lot.

Police officers in Flint lay down their gear and start marching with protesters 💪 pic.twitter.com/DlqaPSdSW8

Peace prevailed in Flint today as Genesee County Sheriff Chris Swanson and his officers put down their batons and marched with protestors pic.twitter.com/p6fCnhRDzz

Swanson spoke out against Chauvin and the injustice that went on in Minneapolis.

“This is the way it’s supposed to be — the police working with the community,” Swanson said. “When we see injustice, we call it out on the police side and on the community side. All we had to do was talk to them, and now we’re walking with them. … The cops in this community, we condemn what happened. That guy (Chauvin) is not one of us.”

Sheriff Chris Swanson of Genesee County had this to say after joining a peaceful protest in Flint, Michigan last night. https://t.co/FZ4Fe9173M pic.twitter.com/CqUogileWg