Shia LaBeouf Took The ‘Hot Ones’ Challenge, Talked About Wrestling Tom Hardy Naked, And Much, MUCH More 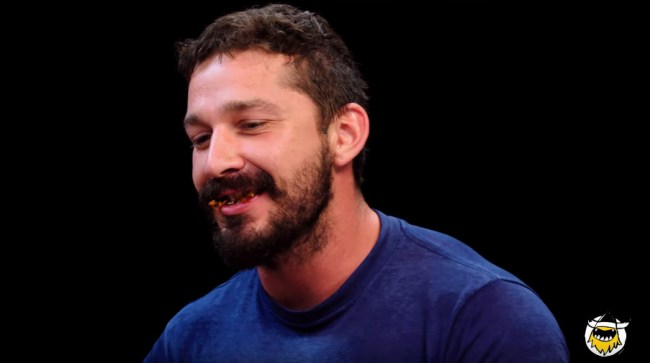 Do you know how you know you’ve made it as a web series? When Shia freaking LaBeouf decides to come on your show.

And just like the man himself, LaBeouf’s episode of First We Feast’s “Hot Ones” Challenge is unlike any other.

LaBeouf and host Sean Evans hit on several topics that I am pretty sure have never been discussed on the show in its over 160 episodes.

Among the topics you will hear them discuss below are the time LaBeouf wrestled naked with Tom Hardy and how Shia ended up giving Kanye West his Indiana Jones hat.

LaBeouf told Evans that the widespread rumors of him knocking out Tom Hardy on the set of Lawless are “a bunch of bullsh*t,” but they did wrestle all the time. Hardy was also getting ready to play Bane so he was huge.

He tells the story of how one week while his girlfriend was in town, Hardy showed up while she and LaBeouf were both naked. When that happened she screamed and ran into the kitchen, but Hardy was able to grab Shia.

“So now I’m naked, on his shoulder, we’re in the hallway, we’re wrestling around,” he said, adding that his girlfriend was filming the entire thing, which made him upset because Hardy “got the better of me, but I’m in some weird twisty naked position like my shits over here and the shits over here I’m like uh don’t. We ended up inching over the stairs where the stairs were and he fell down the stairs. He wound up hurting his back so for the rest of the shoot he told everybody I knocked him out, but that wasn’t the case, we were having some weird like, cutie wrestling match.”

They also hit on this…

LaBeouf revealed that the second life all of those green screen videos he made got on the internet was the entire purpose of them. The intention of them was specifically to create memes.

He also revealed that this is probably his favorite Shia LaBeouf meme, adding that memes qualify as art because “anything that moves you is art.”

And that isn’t even half the things Evans and LaBeouf discussed. It’s a definite must-watch.