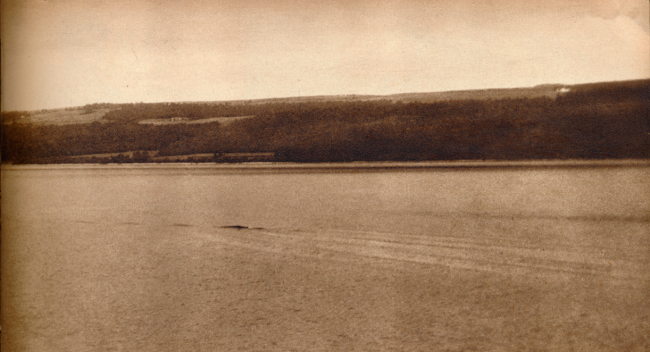 In the continuing effort to finally get a solid look at the elusive Loch Ness Monster, five new webcams have recently been placed around the 23-mile-long loch.

As a result of these new camera installations, Irishman Eoin O’Fagan believes he has recorded the first Loch Ness Monster sightings utilizing these new webcams.

“The first at the Clansman webcam Loch Ness at 20.13pm on September 6, is of a water disturbance, and a long dark shape which was recorded for 4 minutes, and was the only darkened water visible in the recording of the loch in that time.”

His second video was taken at 7:35 p.m. on September 15 at the Shoreland Lodges Webcam.

“An object visibly appears on the left near the shore and moves steadily to the right of the screen and out of webcam coverage. This object is black and long in the region of 6 to 8 feet long, like an eel, or rather a very large or giant one. Its dark black color breaks the surface occasionally as it moves to the right.”

This is the sixth time the Loch Ness Monster has been spotted in 2022, but it’s not official… yet

Eoin O’Fagan is one of the most prolific Loch Ness Monster spotters in the world. This is at least the 16th time since 2017 that he has reported a sighting.

This time, however, his sighting may not make it into The Official Loch Ness Monster Sightings Register.

He told the Daily Record, “The Register says that you have to report any sightings from the new webcams to the owners first, and if they like them, they will contact Gary [Campbell, operator of the Official Loch Ness Monster Sightings Register].

“I sent the Clansman video and another I recorded on my phone which was of poor quality to Visit Inverness Loch Ness (VILN), however, I was told by them that any potential sightings will have to go directly to Gary Campbell to be considered, as they have ‘only opened windows to the wonderful Loch’ for people to see from afar. I then fed this back to Gary, and he is seeking clarification.”