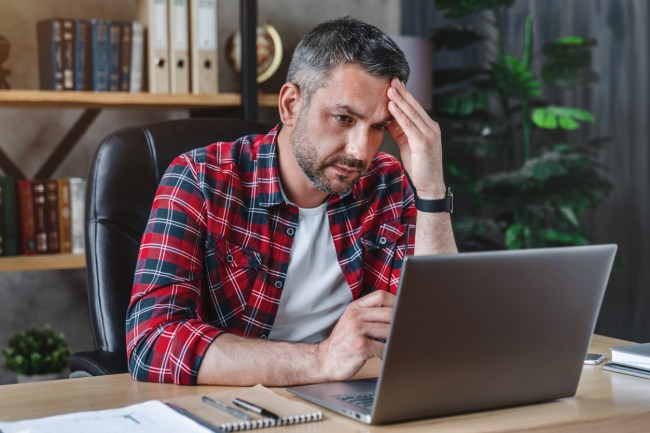 It takes a big man to accept when they are starting to become washed-up. There is no scientific evidence behind this, but as soon as you hit age 26-27, everything just starts to inexplicably slow down.

Maybe it’s the noticeable decline in nightlife activity. Perhaps Tuesday nights become less about happy hour beer specials and more about “ABC has a tremendous primetime lineup.” Or, most likely, you have a significant other and the incentive to actually go somewhere during the week isn’t quite there anymore. Whatever your reason may be, if you think that it’s happening, it’s probably happening.

Nobody wants accept their better days are behind them, but if you can relate to a good chunk of the things on this list, it might be time to accept that’s the case.

All Of The Signs That You’re Officially Washed-Up

1. You get mad at yourself for waking up at noon on a Saturday

2. Getting invited to a bar on a Thursday is the ultimate imposition

4. The time you once devoted to comparing sneaker colorways is now spent on researching shoes with the best arch support

5. The only thing you’ve put up your nostril in the past two years is a neti pot and Flonase

6. The biggest appeal of boozy brunch is the “brunch” part

7. The mere prospect of playing full-court basketball is legitimately terrifying

8. Going to Costco has been the highlight of at least one of your weekends

9. You unmatched with someone on Tinder because they weren’t actually looking for a long-term relationship

10. You get drunk and read books

11. You’ve texted the words “Can you just call me instead?”

13. You appreciate the practicality of cargo shorts

14. You’re still playing Madden ’18 because “the only thing that changes are the players”

15. The first thing you look for when you’re handed a beer menu is the option with the least amount of booze

16. You’ve turned down a free rental car upgrade because it was too flashy

17. You listen to multiple podcasts about military history

18. Your ironic mustache is no longer ironic

19. Professional athletes who graduated from college after you did have already retired

20. You don’t have to lie to your doctor about how many drinks you have on a weekly basis

21. You’ve watched a movie just because it had Kevin Hart

22. You actually smoke weed for its medicinal properties

23. You have to stretch before you even consider doing anything athletic

24. You have a credit card at Lowes and Home Depot

26. “Sleeping in” means waking up at 8 a.m., laying in silence for 45 minutes, and scrolling through Instagram for an hour

27. You opened an incognito tab on your Google Chrome browser and typed in: “Am I washed up?”