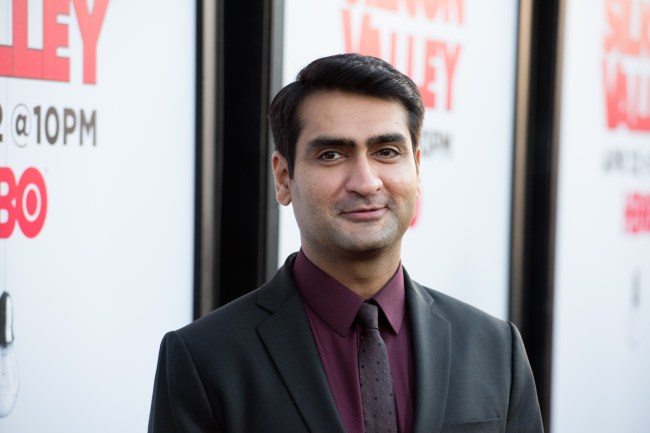 ‘Silicon Valley’ just ended and Kumail Nanjiani has been apparently working overtime to get prepared for his role in Marvel’s ‘The Eternals’.

On Monday morning Nanjiani shared a pic of himself without a shirt and dude is absolutely ripped.

Nanjiani had pretty hilarious and honest caption in regards to his transformation.

I never thought I’d be one of those people who would post a thirsty shirtless, but I’ve worked way too hard for way too long so here we are. You either die a hero, or you live long enough to see yourself become the villain. I found out a year ago I was going to be in Marvel’s Eternals and decided I wanted to transform how I looked. I would not have been able to do this if I didn’t have a full year with the best trainers and nutritionists paid for by the biggest studio in the world. I’m glad I look like this, but I also understand why I never did before. It would have been impossible without these resources and time. So big thanks to @grantrobertsfit who started working with me at the beginning of the year and made me understand true physical pain for months and months. Then, once we started shooting, a massive thanks to @davidhigginslondon and his team (@ellispartridge, @thebeardypt, @tomcheesemanfitness) for training me almost every day and making me strong, limber and injury free. I can almost touch my toes now. (And thank you for forcing me to do cheat meals David.) Matthews Street Catering for their delicious and healthy meals. And finally, the biggest thanks goes to @emilyvgordon for putting up with me complaining and talking about only working out and dieting for the last year. I promise I’ll be interesting again some day. #thirstyshirtless (Photo by @markupson.)

The Internet was in awe of Nanjiani’s new body.

Welp, Kumail Nanjiani is ready for 'The Eternals' 😳

Kumail clearly got those Hugh Jackman branded steroids 😬 His arm is more vein than limb. pic.twitter.com/fhtWMjxLj6

Do we now live in a world in which Kumail Nanjiani arguably looks stronger than Chris Hemsworth? pic.twitter.com/XLYu2Tj2Oi

I think it’s time we take a look at the Kumail Nanjiani diet pic.twitter.com/3yk6trouZs

Who the fuck gave Kumail Nanjiani permission to go off like that? 🔥🔥🔥 @kumailn MARVELous transformation! Call me when you can eat noodles again! pic.twitter.com/MdBStVMaRw

I WAS NOT PREPARED pic.twitter.com/koTNWuS6g0

Kumail Nanjiani "I want to be in the Marvel Cinematic Universe."
Martin Starr "They don't need anymore dorks." pic.twitter.com/46XiJa7bl0