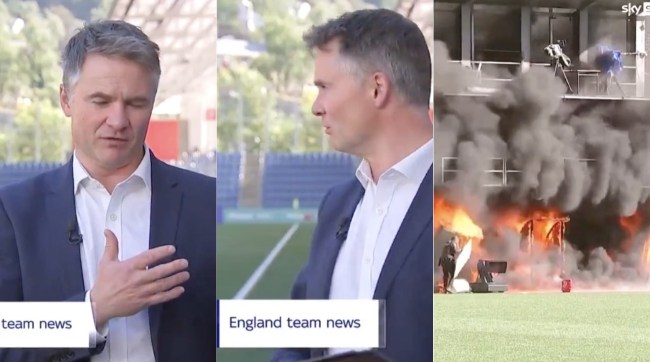 2011 was my first year in college. Just saying that out loud makes me feel like the crypt-keeper. Referencing Freaky Friday in a late-2021 article also dates me quite a bit, but luckily, I imagine that reference has gone over most of your heads anyway. If it hasn’t, though, shout out to you. But I digress.

Like most 18-year-old kids, I didn’t know what the hell I wanted to do for the rest of my life, I just knew I was good at writing. So I considered journalism before ultimately pivoting to communications after realizing that social media was making facts increasingly irrelevant and therefore making journalism all the more difficult. Who knew how right I’d wind up being.

Still, despite not taking the path, I’ve always respected the hell out of journalists and reporters, most of whom are simply in pursuit of speaking truth to a subject they love — whether it be sports or politics or entertainment or just good old fashioned local news that keeps the community informed.

Take Sky Sports’ Rob Dorsett, for example, who — in the midst of reporting on the England National Team’s potential line-up in tomorrow’s match against Andorra — was confronted with a literal raging inferno whilst live on air. Dorsett, despite being in sports reporter mode, immediately went into journalist-live-on-the-scene mode in an almost robotic fashion, as he transitions from one topic to the next with a simple: “We’re just gonna pan across there, Joe, because this quite a big instance that’s happening live that’s just been pointed out to me.” In direct contradiction to the towering flames across the pitch, our man Rob here has got ice in his veins.

And don’t worry, according to reports, there have been no injuries so you’re allowed to chuckle at the video… because I *certainly* have. The second video is the good one, by the way.

Here's the moment a fire broke out at the Estadi Nacional during @RobDorsettSky's live report on Sky Sports News… pic.twitter.com/CH1KpC71XN

As a result of the fire, England’s World Cup Qualifying match against Andorra is currently in doubt.