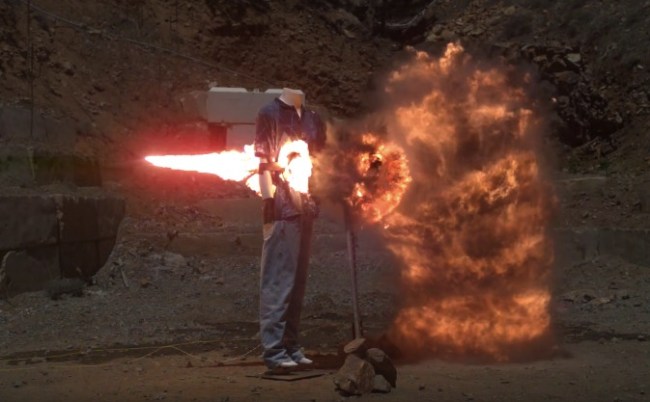 Via The Slow Mo Guys

Watching stuff blow up in slow-mo HD was like 50% of the reason The Mythbusters was so popular and now that that show’s off the air, The Slow Mo Guys on YouTube have taken the torch and filmed the sickest slow-mo HD explosions on YouTube. For their latest stunt, their filming in a speed so slow my mind can barely process it.

For this clip, The Slow Mo Guys are filming a massive explosion chain reaction and they’re doing so at 200,000 frames per second. To contextualize that a little bit, the iPhone 8 claims to film at ‘4K resolution’ while filming at 240 frames per second in slow-mo mode. So they’re filming over 833x slower than the latest iPhone is capable of. For this, they’re using top of the range Phantom cameras from Vision Research and they’re filming at The School Of Mines in Colorado because these explosions are next level:

I’ve said this before and I’ll say it again: The Slow Mo Guys have the best jobs on the Internet. They get paid to conduct outrageous science experiments that often involve badass explosions. Then they get to film it all in slow-mo HD and get paid seven figures a year for their work. Does it get any better than that?