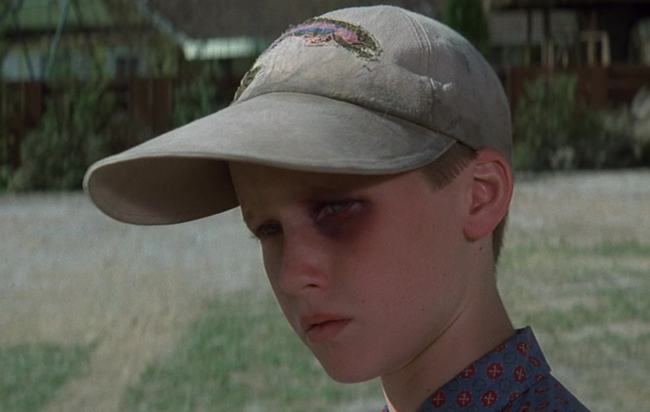 When The Sandlot was released in 1993, it was met with lukewarm reviews from critics and ultimately garnered $34 million at the box office. However, the coming-of-age film would eventually become a cult classic; an exercise in meta nostalgia that makes the people who fell in love with it as a kid pine for the carefree spirit of a summer that unfolded over three decades before the movie came out.

I can’t tell you how many times I’ve watched The Sandlot over the years, and a few weeks ago, I revisited it yet again only to find myself pondering a question that had somehow never popped into my mind prior to that viewing: What the hell is the deal with Smalls’ hat?

The piece of apparel in question is emblazoned with a trout and features a laughably oversized brim, and after doing some digging, it would appear this particular type of lid is a relic of an era designed to shield you from the rays during fishing excursions before bucket hats became all the rage.

But why was Smalls wearing it? I attempted to track down the actor who played him only to discover he seemed to have dropped off the map shortly after headbutting a cop at an airport, and while I did shoot the film’s costume designer a message on LinkedIn, I failed to receive a reply.

As a result, I decided to do what I could to get to the bottom of a mystery at least one other person has attempted to solve before, as a member of a message board devoted to film props (a thing that apparently exists) shared they’ve never been able to track down the origins of what they believe is a hat designed specifically for the film.

That means we have to rely almost entirely on The Sandlot itself in an attempt to answer this eternal question, and after giving it yet another watch, it seems like the most likely explanation is that the hat with the brim that rules all brims is a subtle touch used to cement just how big of an L-7 weenie Smalls really was before being embraced by the merry gang of adolescents at the center of the movie (but, as you’ll soon see, it may have an even deeper meaning.)

We’re treated to our first hint that Scotty is an Indoor Kid almost immediately after The Sandlot transports us back to 1962, where the Smalls family is moving into their new home somewhere in the San Fernando Valley. We’re soon introduced to his stepdad Bill (played by Dennis Leary,) who was apparently too busy setting up a man cave filled to the brim with sports memorabilia to deal with the multiple pieces of furniture still sitting on the curb outside. 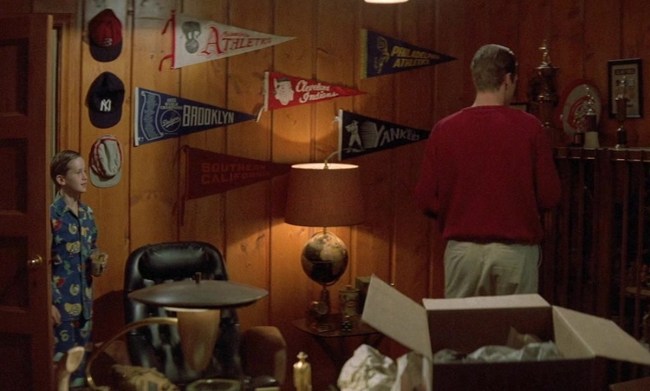 Bill comes off as someone who would use certain adjectives concerning one’s sexual preference that are very frowned upon in this day and age to describe many of his hopelessly unathletic stepson’s lifestyle choices, and I can only imagine he had at least one conversation with his wife where he bemoaned Smalls’ obsession with his Erector set by saying something like, “Back when I was his age, I was more concerned with a different kind of erecting.” Why is this relevant? Well, I think it’s safe to say that particular piece of headgear isn’t something he’d have in his collection.

The hat makes its first appearance when Smalls sprints out of his house with a plastic baseball mitt in tow to join the kids he admitted to stalking one day after school at their titular field. In the scene, we get a better idea of his questionable sartorial aesthetic, as he apparently decided nothing screams “Let’s play some baseball!” like khakis and a button-down. 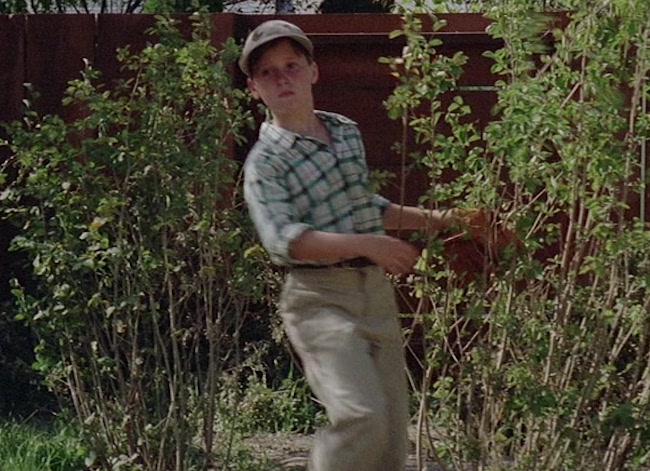 The next few scenes affirm John Mulaney’s theory that middle schoolers have the unparalleled ability to target the flaws you’re the most sensitive about; for example, when Yeah-Yeah mocks Smalls for his haplessness, Benny shuts him down by telling him he’s in no position to criticize his skills (or lack thereof) because he runs “like a duck.” While someone’s outfit does eventually get roasted, it’s Squints who’s at the receiving end of that particular chirp, as he’s told his clothes are already outdated after complaining they were “going out of style” due to how long Benny took trying to teach Smalls how to catch.

The hat itself doesn’t even get addressed until almost 25 minutes into the movie, which is when Benny tells Smalls it belongs in a fireplace as opposed to the top of his head. It’s at this point Smalls reveals it’s the only one he owns before swapping it out for the one gifted to him by The Jet—an admission I believe serves as the key to this cipher.

Based on the evidence at hand, I have come to the conclusion Smalls came into possession of the hat following the death of his biological father. This would explain why he goes into Indiana Jones Mode whenever it falls off of his dome and declines to take Benny up on his suggestion to incinerate it, as he can be seen rocking it while doing his thing in the broadcast booth at a Dodgers game at the end of the movie.

Mystery solved? I can’t say for sure, but if you’ve got a better explanation, I’d be more than glad to hear it.