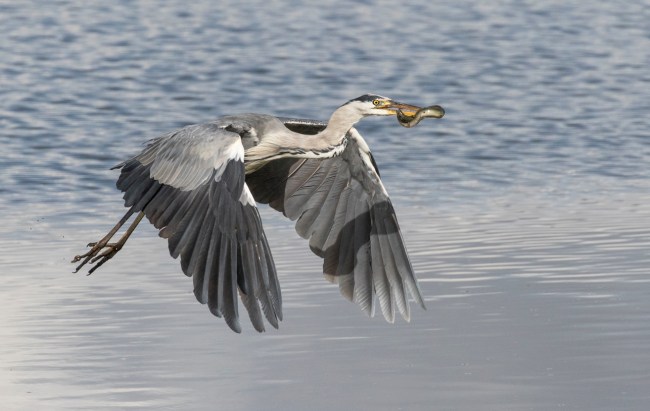 We always talk about how “nature is metal,” but there was a recent occurrence that was photographed which highlighted just how much nature is metal. A photographer captured the exact moment that an Alien-like snake eel made the boldest escape after being eaten by a heron.

A heron, which is a long-legged carnivorous coastal bird, devoured a snake eel whole. You know how your mom told you to chew your food? Well, herons never listened to your mom and now they’re having their intestines obliterated. Herons swallow their prey whole, which is fine, unless you’re chowing down on snake eels.

Snake eels are “marine fishes snakelike creatures are more benign than their aggressive relatives, the morays.” The problem with devouring snake eels whole is that they will use “their hard pointed tail tip, which is for digging, to burst through” the stomach of fish or birds who attempt to dine on them. Talk about indigestion. Better grab some TUMS.

That was the case in this fascinating case in Delaware. Photographer Sam Davis caught the exact moment that a snake eel exploded out of the stomach of a heron. Oh my The insane part is that the eel made its chest-burster-like debut while the heron was flying. Strangely, the heron seems completely unfazed that its lunch has punctured through its stomach and is attempting a very brazen escape.

“The heron didn’t seem to act much differently,” Davis told Live Science. “It was in the water and flying around.”

All the commotion caused eagles and a fox in the area to take notice because they believed they could get a two-for-one meal special.

“Several juvenile eagles and a fox were following the heron, possibly hoping to scavenge a meal in case the heron or the snake eel didn't make it…” pic.twitter.com/M0PYPMtGll

“I would think this is either very rare or very rarely seen in a bird species, at least as far as I am aware,” said John Pogonoski, an ichthyologist with the Australian National Fish Collection. “The heron possibly survived, it didn’t look too inconvenienced, but would depend on how well the wound healed and if it was able to avoid an infection.”