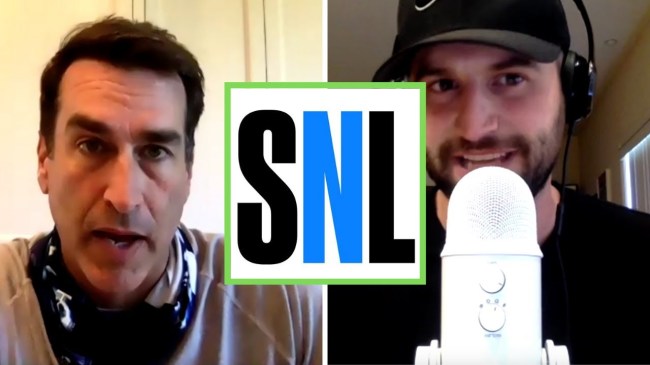 One might consider Saturday Night Live to be the throne of comedy and almost a sure thing to jump start your comedic career. From Eddie Murphy to Adam Sandler, to Bill Murray, the names are endless of comedians from SNL that went on to have remarkable careers. Rob Riggle, who most remember from his work on’ Step Brothers,’ ‘The Hangover’ and other hits discussed the night he auditioned for a spot on SNL.

“They invite you to audition, it’s a two part audition. The first night you go to some stand up club that is TBD.” said Riggle. “You get up and do five minutes of your best stuff, but what they do is they don’t tell anybody where you are going that first night because they don’t want the New York people stacking the house with their own friends and family.

So, I literally went and sat in a Starbucks in Midtown and waited, trying not to be nervous and trying to be positive. And then they do a mass call out to everyone, they send out the call and tell you that you have an hour to get to Comic Strip Live on 78th and 3rd Ave., you go get a cab or jump on a subway or bus and you haul ass to the comedy club. As you come in they know who they are looking for, as you get in they put your name in a hat and sure enough they pull my name, Rob Riggle first, I had to go first.”

The journey for Riggle to SNL was a different one than most as he spent most of his life in the Marines before he had auditioned for the part. Riggle spent one year on SNL before he found himself in the limelight with movies starring alongside the likes of Will Farrell, Bradley Cooper, and Mark Wahlberg. For more on this wild story be sure to subscribe to The Brilliantly Dumb Show on YouTube, Apple Podcasts, and Spotify.