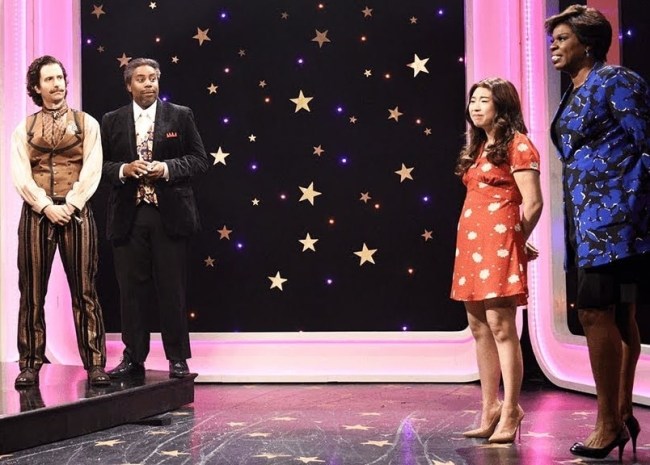 Saturday Night Live has enjoyed comedic success with pumpkins in the past. Tom Hanks as David Simon Pumpkins skit from 2016 has over 12 million views on YouTube and has become a Halloween institution. SNL goes back to the pumpkin comedy well for a sketch titled “The Pumpkin Patch,” but it isn’t as innocent as it sounds.

The bit involves two workers at a farm who fall in love with pumpkins and can’t stop fantasizing about having sex with the gourds. This gives a whole new meaning to “jack-o-lantern.”

Awkwafina was the host for the second episode of SNL‘s 44th season and she starred in sketch about dating magicians. The Crazy Rich Asians actress was a contestant on a Bachelorette-style dating show, but all of the options are creepy magicians.

Travis Scott was the musical guest for this week’s Saturday Night Live episode and he brought along some friends. Joining the Houston rapper performed along with John Mayer, Tame Impala’s Kevin Parker, and Kanye West producer Mike Dean.

The “Goosebumps” rapper performed a funky medley of “Skeletons” and “Astrothunder” from his latest album “Astroworld.”

Travis also performed “Sicko Mode” the day before he is the headliner act in Sunday’s Austin City Limits music festival.

The rapper also showed off his acting skills in a skit where a dance crew battle other dancers… by dancing to game show theme songs from Jeopardy! and The Price Is Right.

Now here’s David S. Pumpkins to get you in the Halloween mood.