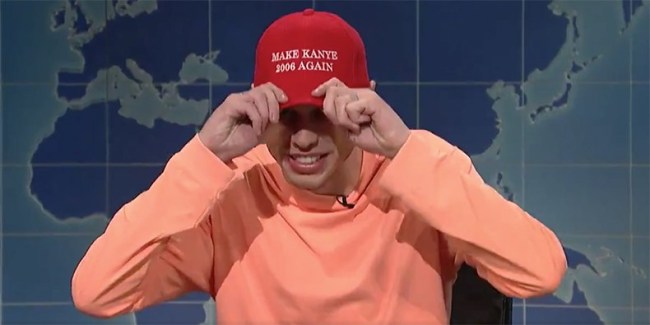 Last week Kanye West was the musical guest on Saturday Night Live and helped boost ratings to a seven percent increase over 2017’s season opener. However, Kanye’s appearance managed to piss off a lot of people including Pete Davidson.

Kanye wore a “Make America Great Again” hat during SNL and said he was “bullied” for wearing the pro-Trump symbol. After performing his song “Ghost Town,” Kanye discussed his plans to run for President and his support for Trump.

KANYE SNL TALK THAT GOT CUT OFF FREEDOM OF SPEECH SHOULD HAVE EXTENDED pic.twitter.com/IpULoEJxsN

Like many, I don’t watch Saturday Night Live (even though I past hosted it) – no longer funny, no talent or charm. It is just a political ad for the Dems. Word is that Kanye West, who put on a MAGA hat after the show (despite being told “no”), was great. He’s leading the charge!

Pete Davidson appeared on “Weekend Update” to confront Kanye West over his recent appearance on SNL.

“First off, a lot of people thought [Michael] Che should be the one to talk about Kanye,” Davidson said. “But we discussed it, you know, because Che’s black, but, like, I’m crazy. And we both know which side of Kanye’s at the wheel right now.”

“Kanye, I know you’re like, ‘Yo, this is the real me. I’m off the meds.’ Take ’em. There’s no shame in the medicine game,” Davidson instructed Kanye. “I’m on them. It’s great! Take ’em. There’s nothing wrong with taking them. If I got on a plane and the pilot said, ‘I just want all of you to know: This is the real me flying the plane,’ I’d jump out.”

“Being mentally ill is not an excuse to act like a jackass,” Davidson said of Kanye, who is bipolar.

“What Kanye said after he went off the air last week was one of the worst, most awkward things I’ve ever seen here and I’ve seen Chevy Chase speak to an intern,” Davidson joked. Pete slammed fellow SNL comedian Chevy Chase two weeks ago.

Davidson regretted not bullying Ye for his MAGA hat. “He started by saying people backstage tried to bully him into not wearing it,” Davidson said of Kanye. “He wore it all week. Like, nobody told him not to wear it. I wish I bullied you. I wish I suggested that, you know, it might upset some people, like, your wife or every black person ever.”

The President also hosted SNL in 2004 where he appeared in a skit where he was the spokesperson for his fiction Donald Trump’s House of Wings restaurant.