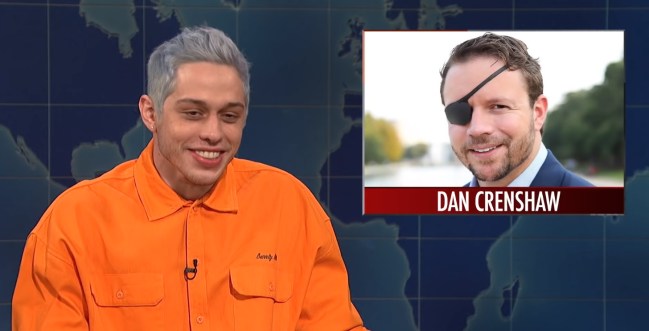 Pete Davidson has been more in the spotlight after getting engaged and then getting dumped by Ariana Grande. In this week’s Saturday Night Live, Davidson addressed the breakup with the pop singer and he also mocked a former Navy SEAL who lost an eye while serving in Afghanistan.

During SNL‘s “Weekend Update” segment, Davidson gave his first impressions of candidates running for office in the 2018 midterm elections. Davidson ridiculed Democratic incumbent Andrew Cuomo as well as Republican candidates Rick Scott, Peter King, Greg Pence, and Dan Crenshaw. The insults on the candidates were not based on their political beliefs but rather their appearance.

Crenshaw’s campaign website details Dan’s extensive military service and how he nearly lost vision from both eyes while serving in Afghanistan.

Dan graduated from Tufts University in 2006, where he earned his Naval officer commission through Navy ROTC. He immediately reported to SEAL training in Coronado, CA, where he met his future wife, Tara, just a few months later. After graduating SEAL training, Dan deployed to Fallujah, Iraq to join SEAL Team Three, his first of five deployments overseas.

On Dan’s third deployment in 2012, his life changed forever. After six months of combat operations, Dan was hit by an IED blast during a mission in Helmand province, Afghanistan. He was evacuated and awoke from his medically induced coma learning that his right eye had been destroyed in the blast and his left eye was still present, but badly damaged. Dan was completely blind and the doctors did not believe he would ever see again. Tara stood by him every day and night, keeping faith and praying he would see again. After several difficult surgeries, he eventually regained sight in his left eye, a miracle according to the head surgeon. Dan refused to quit and went on to deploy twice more, first back to the Middle East in 2014 and then South Korea in 2016.

Dan was medically retired in September of 2016, after ten years in the SEAL Teams. He left service with two Bronze Stars (one with Valor), the Purple Heart, and the Navy Commendation Medal with Valor, among many other recognitions. Soon after, Dan completed his Master in Public Administration at the Harvard Kennedy School of Government. In September of this year, he was back in Houston, volunteering for days on end in areas of Katy devastated by Hurricane Harvey. He saw first-hand the unthinkable losses that his neighbors suffered, but he also saw Texan grit and resilience. He wanted to do more, and this November Dan and Tara decided that the best way to serve the people of Texas would be in elected office.

There are 54 open seats in the U.S. House and three open seats in the U.S. Senate so there were plenty of potential targets to roast, but Davidson decided to lampoon the military veteran who lost an eye while serving his country. One would surmise, that Davidson, who has also been roasted over the appearance of his eyes, would be a little more sympathetic to someone who also has unusual eyes.

I first met Dan in May, he was nothing but kind and welcoming. He even let met stick my phone right in his face to snap a photo of his glass eye, engraved with the SEAL insignia. This is a man of pure class. pic.twitter.com/hjS3XfF2AW

People were quick to point out that Crenshaw lost his eye in “war — or whatever.”

That’s disgusting. @DanCrenshawTX is a war hero and lost his eye serving his country. SNL should be ashamed. #txlege

SNL mocking Dan Crenshaw for losing his eye in war “or whatever” is low even for them.

Totally cheap, disgusting and classless of SNL to have Pete Davidson mock Dan Crenshaw for wearing an eye patch…then giggle that he was injured in the line of duty.@DanCrenshawTX is a Navy SEAL and hero who lost his eye in an IED attack in Afghanistan. pic.twitter.com/7VbMohQ3t2

Dan Crenshaw was nearly blinded in 2012 when he was hit by an IED blast in Afghanistan's Helmand province, where he was on his third deployment. He lost his right eye in the blast, and his left eye was badly damaged.

Shame on you, @nbcsnl, this is disgusting! pic.twitter.com/VQnhXMa6iT

Those who live in butthole eye houses should not throw around eye jokes… https://t.co/vamA9TQe1e

"lost his eye in war or whatever."….. this is @snl – they address a cast members breakup as if it's of vital importance. but laugh at a vet. https://t.co/4xoMLCKWTH

At the end of the skit, Davidson addressed the breakup with his former fiancé Ariana Grande. “The truth is, it’s nobody’s business,” Davidson said. “Sometimes things just don’t work out.”

Davidson continued, “She’s a wonderful, strong person and I wish her all the happiness in the world.”

Ariana released a new single 30 minutes before SNL aired that was directed at her famous ex-boyfriends including Davidson and Mac Miller. The song Thank U, Next had a much nicer tone than her tweets attacking Davidson on Friday.