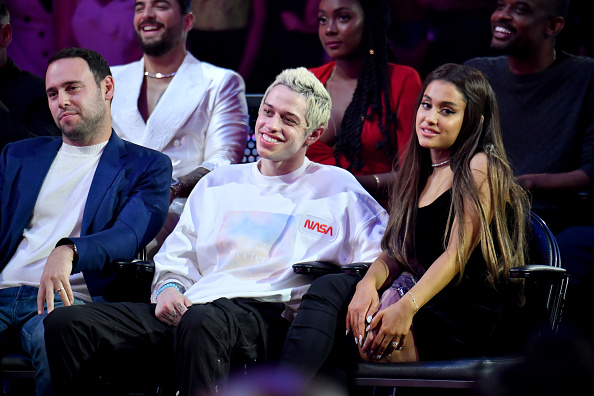 The fairytale romance between Ariana Grande and Pete Davidson is deader than No Fear shirts. The once inseparable celebrity couple took a turn towards a bitter breakup after Ariana slammed Pete for an engagement joke he made during an SNL promo.

Not a fantastic joke in any sense, but still just a harmless joke. Unless you’re Ariana Grande apparently. The pop star lashed out at Davidson poking fun of their relationship. “Thank u, next,” she wrote on a now-deleted tweet. “For somebody who claims to hate relevancy u sure love clinging to it huh.” Grande also quote-tweeted a fan who commented on the SNL promo that said, “SNL is about to milk their breakup just like they did with the engagement.”

In September, Davidson joked that they will break up in an SNL segment. “God forbid we split up and she takes half my sneakers,” Davidson said about getting a prenup. “If we break up, and we won’t — we will — but we won’t,” he joked, “but like in 10 years if, god forbid that ever happened, there will be a song called ‘Pete Davidson’ playing in speakers at Kmart and I’ll be working there.”

Two weeks ago, Davidson also made jokes about his breakup during a gig. “Well, as you could tell, I don’t want to be here. There’s a lot going on,” Davidson told the crowd. “Does anybody have any open rooms? Looking for a roommate?”

“Um, I’ve been covering a bunch of tattoos, that’s fun,” Davidson joked. “I’m f*cking 0 for 2 in the tattoo [department]. Yeah, I’m afraid to get my mom tattooed on me, that’s how bad it is.”

During the five-month whirlwind romance, Davidson and Grande got at least 17 tattoos dedicated to one another. But now both are eagerly trying to rid their bodies of any ink reminders of the failed relationship.

Ariana covered up her tattoo that said “Pete” on her finger with a band-aid.

In case you needed more reason to not get a tattoo of someone you’ve dated after only a few months, just look at Ariana Grande. The singer has already re-inked a tattoo inspired by her former beau. A tattoo on her hand said “Reborn,” but now it is a feather.

It will surely be a difficult decision for Pete to cover up his Piggy Smallz tattoo dedicated to the teacup piglet that he and Ariana adopted together in much happier times.

Allegedly, Davidson and Grande broke up because the SNL star was not compassionate enough to Ariana after her ex-boyfriend Mac Miller died from an apparent drug overdose in September.

“In the aftermath of Mac’s death, our sources say Ariana realized a couple of things—she couldn’t be fully invested in her relationship with Pete, and she had rushed into a looming marriage way too fast by getting engaged,” TMZ reported.

According to one of his comedy friends, Davidson had hope for getting back with Ariana in the future, despite that she allegedly changed the locks on her $16 million pad in New York City that they once shared.

How much does it suck for Ariana that she has a Pete Davidson song on her current album? Talk about buyer’s remorse.