Pete Davidson Addresses Ariana Grande Breakup Onstage In His First Comedy Gig Since: ‘I Don’t Want To Be Here’ 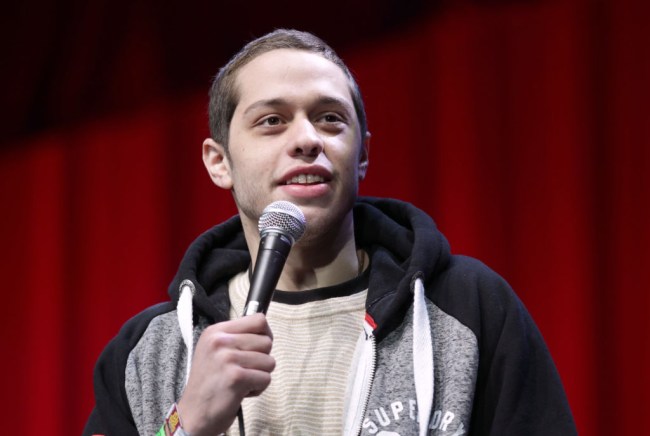 Pete Davidson is 24 years old and has barely been a household name for a full calendar year. While the general public collectively weeps for his breakup with Ariana Grande, I feel nothing but relief. At 24, I was sleeping with one shoe on, consistently leaving my debit card at bars, and texting my old babysitter at 3 am. The mid-to-late 20s is a period of immense trial-and-error and it’s impossible to discount the importance it has on personal growth.

This obviously doesn’t quell the heartache that comes with a breakup, that inescapable weight of sadness and anxiety and intense scrutiny of where it all went wrong. I feel for Pete, and I understand why he canceled a recent comedy gig for “personal reasons.”

But, the best thing you can do after a breakup is get back on the horse and just start doing the things that make you happy. Self-care is key. On Saturday night, Davidson made his first onstage appearance since the breakup co-hosting the comedy show Judd & Pete for America, benefiting Swing Left at Largo at the Coronet in West Hollywood with Judd Apatow.

According to E! News, Davidson broke the ice early in the gig:

“Well, as you could tell, I don’t want to be here. There’s a lot going on,” Davidson told the crowd. “Does anybody have any open rooms? Looking for a roommate?”

“Um, I’ve been covering a bunch of tattoos, that’s fun,” Davidson told the crowd. “I’m fuckking 0 for 2 in the tattoo [department]. Yeah, I’m afraid to get my mom tattooed on me, that’s how bad it is.”

About the tattoo thing, Pete should have known better. He’s had to cover up the tattoo he inked on his arm of ex Cazzie David’s face, and now needs to cover up tribute tattoos for Ariana. Maybe temporary tats are the solution.

“So, obviously you know I, we [Ariana and I] broke up or whatever but when me and her first got engaged we got tattoos,” he later continued. “And it was like in a magazine like, ‘Was Pete Davidson stupid?’ And 93% of it said yes,” Davidson told the audience. “So my boy, he was like, ‘Don’t listen to that s–t man. They’re literally f–king haters.’ And I’m like, yeah, f–k that. I’m not stupid. And the other day we were in my kitchen and he was like, ‘Yo bro. Turns out you were stupid.'”

Apatow lauded Davidson for showing up at the show in light of recent events, and the SNL star quipped back:

“I feel like I am America,” Davidson said. “I’m a good guy that just keeps getting kicked in the dick. You’re like, ‘Ah, that f–king poor kid. Hope he doesn’t kill himself.’ That’s America.”

It’s good to see Davidson turning off the Bon Iver album and getting back out into the limelight. The best breakup remedy is time, my friend.