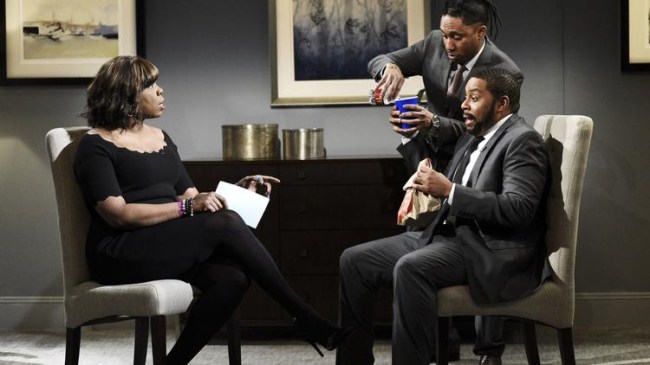 R. Kelly gave a completely unhinged interview to Gayle King last week to try to swing public opinion. There are numerous allegations that the iconic R&B singer is running a harem or cult in his house and he’s keeping underage women captive against their will so that he can abuse them physically and sexually. Saturday Night Live parodied the bonkers interview with Leslie Jones as Gayle King and Kenan Thompson as R. Kelly.

The CBS This Morning interview saw R. Kelly pleading that he was the victim in this case and this SNL spoof played on that aspect. “Thank you for having me, and please just call me victim,”

In the skit, Kelly was bewildered why anyone would keep their cameras out in the open and not hidden. “My lawyer was telling me no, but my ego was telling me yes,” he sings in the interview as a callback to his 1990s song Bump N Grind.

“There are rumors that I have a harem of young girls and I started a — what’s the word? It starts with a ‘Q,’” he says. “You mean cult?” Leslie’s King clarifies. “Yeah, that’s it,” Kelly confirms.

“You can start a rumor about any celebrity, just like that. All you gotta do is push a button on your phone and say, R. Kelly did this to me, and then attach a video of me doing that thing, and people will believe you, it’s scary.”

“Okay guys, think for a minute, use your brains, why would I do these things for 30 years?” Kelly asks. “I gave you Trapped in the Closet, Feelin’ on Yo Booty, Age Ain’t Nothing But a Number, and so many other clues! And this is how you repay me!”

“Now I humbly await your decision, Miss Jail King,” R. Kelly says. “So you’re not the Jail King? So what am I doing here?”

R. Kelly is charged with 10 counts of aggravated criminal sexual abuse of minors. The singer was bailed out of jail shortly thereafter. He was also bailed out for failing to pay child support.

Idris Elba hosted this week’s SNL episode and appeared in several skits such as gold digging men who attempt to pickup WNBA players.

There was a skit that poked fun of the fake outrage about people getting upset over actors not being able to play certain roles with a game show called “Can I Play That?”

There were two women, played by Kate McKinnon and Aidy Bryant, really struggling to make a PowerPoint presentation.