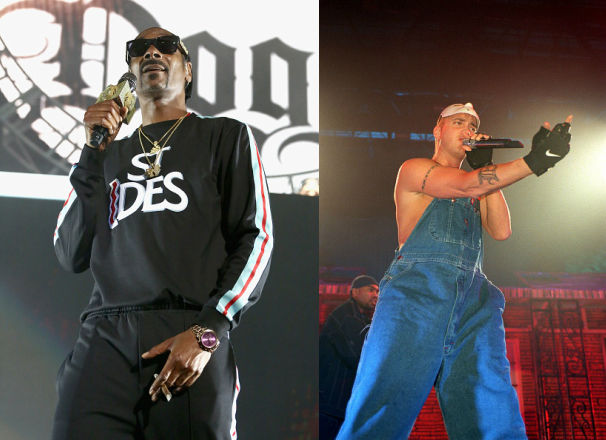 Snoop Dogg and Eminem have never collaborated on an official single together. But that could be about to change if these photos from a Detroit studio are correct. Snoop Dogg posted photos that suggest he is about to work with Eminem for the first time since 2000.

Snoop Dogg is in Eminem’s hometown of Detroit and in the studio with Slim. “Detroit. Tommoro. 8 pm. Redemption of a Dogg had to c M. To get the stamp,” Snoop wrote in the caption of an Instagram post with Em.

In another post on the Gram, this one with D12 producer Denaun Porter, Snoop D-O-Double-G wrote, “Squad. 8 mile.”

Everyone in the photos have smirks on their faces to say that they are cooking up something big. Redemption of a Dogg is Snoop’s stage play starring himself, Tamar Braxton, Omar Gooding, and Eric Benet. Here is the description of Redemption of a Dogg:

Award-winning writer, director and producer Je’Caryous Johnson is once again taking the nation by storm with his new stage play, Redemption of a Dogg. The highly anticipated follow up to his sold out stage play, Set It Off, Redemption of a Dogg, stars entertainment icon Snoop Dogg and features R&B hit maker and star of WE TV’s Braxton Family Values, Tamar Braxton. Redemption of a Dogg examines the internal battle one man has between preserving his life-long legacy and losing the love of his life when he is faced with choosing fame and fortune over faith and family. The play’s story takes audiences on a magical music ride as they step into the captivating world of a Je’Caryous Johnson Entertainment production. Redemption of a Dogg is set against a backdrop of Snoop Dogg’s greatest hits, as well as, songs from his recently released chart-topping Gospel album, Bible Of Love and makes its debut on the heels of the 25th Anniversary of Snoop Dogg’s debut album, Doggystyle.

Redemption of a Dogg is in Detroit for three showdates before heading to Virginia, Washington D.C., Oakland, Pennsylvania, and Brooklyn. Tickets are available HERE.

The last time Snoop and Em worked together was on Eminem’s The Marshall Mathers LP track Bitch Please II in 2000.