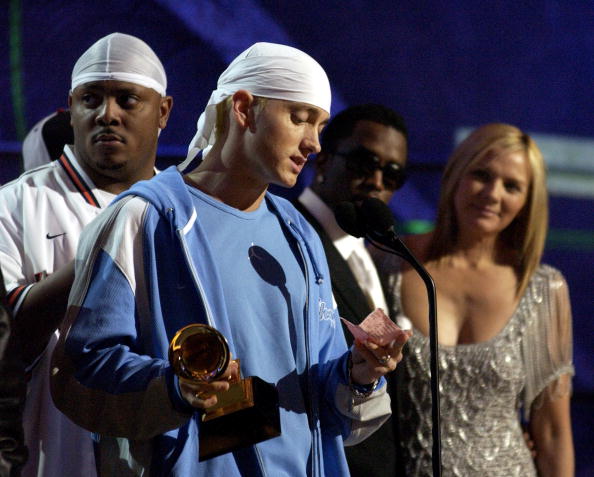 This past September 13th marked 22 years since Tupac Shakur died from his injuries suffered from a deadly drive-by shooting in Las Vegas six days earlier. Eminem opened old wounds this week when he blamed Diddy for Tupac’s death.

Eminem’s “Killshot” had the largest debut of any hip-hop song in the history of YouTube and dissed several fellow hip hop artists including Machine Gun Kelly, Tyler The Creator, Joe Budden, and Diddy. Em alleges that the Bad Boy Records founder put a hit on Tupac and is responsible for the legendary rapper’s premature death.

On September 7, 1996, Shakur attended the Bruce Seldon vs. Mike Tyson boxing match with Suge Knight (Who is in trial this week and face 28 years in prison for manslaughter) at the MGM Grand in Las Vegas, Nevada. Shakur rode in Knight’s 1996 black BMW 750iL car (which was on auction two years ago for $1.5 million).

A white Cadillac pulled up beside Suge’s car and unloaded a hailstorm of bullets, four hit Tupac — twice in the chest, once in the arm, and once in the thigh. Tupac died six days later. The killer was never identified and the murderer is still at large to this day.

Since there was an East Coast/West Coast rap war being waged at the time, many immediately blamed P. Diddy and The Notorious B.I.G. for the death of Tupac, real name Lesane Parish Crooks. Biggie Smalls was also killed in a drive-by only months later.

Eminem’s controversial lyrics in “Killshot” reignites those unfounded rumors over 20 years later. “Killshot, I will not fail, I’m with the Doc still/But this idiot’s boss pops pills and tells him he’s got skills/But, Kells, the day you put out a hit’s the day Diddy admits/That he put the hit out that got Pac killed,” Eminem raps on the track. Marshall Mathers seems to walk back those damning accusations at the end of the song when he says, “And I’m just playing, Diddy, you know I love you.”

Jay Electronica clapped back at Em. “How dare you accuse Diddy of killing Tupac while you completely look pass Jimmy Iovine and those who profited from his death the MOST,” Jay Elec said in the now deleted tweet. “You best tread carefully Son, before I come tear your ivory tower down like Sulaiman done the Templar Knights. #ripProof.”

According to Joe Budden, Sean John Combs is already handling the situation. During a recent episode of The Joe Budden Podcast. Budden said that he privately spoke to Diddy about Eminem’s accusations.

“Nothing to speculate about. Nothing to talk about,” Budden says. “Puff said it’s in his hands and he said I can tell ya. That’s the end of that. He said, ‘Yeah, there’s nothing to say about it. It’s in my hands.’ He’s wild. Period.”

Diddy has vehemently denied that he had any part of the murder of Tupac Shakur.

A former LAPD cop alleged that Diddy put out a $1 million hit on 2pac.

The always opinionated 50 Cent has weighed in on the conspiracy theory in the past.

The more eyeballs this controversy gets, the more it will surely be used as a marketing ploy.