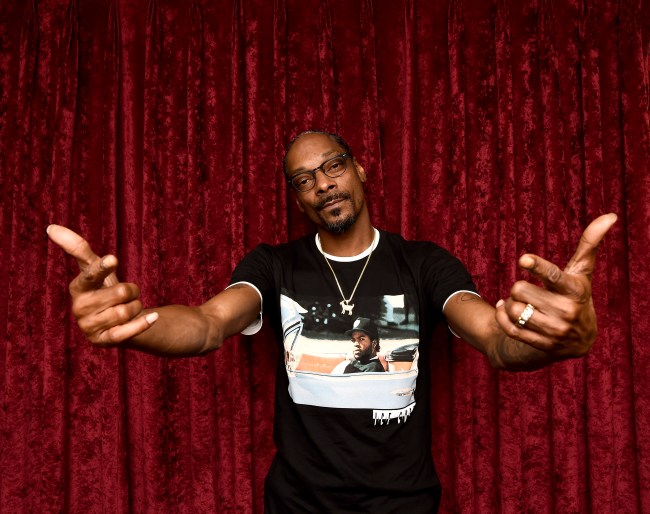 Celebrities releasing cookbooks is in vogue ever since Chrissy Teigen released Cravings and made a quadrillion dollars. It makes sense. They’ve already got millions of fans. Why not cash in on that? But it’s hard to know which celebs to trust. How do we know if their love of food and cooking is genuine or if they’re just trying to cash in? When it comes to food, we’ve got a pretty good idea of who the experts are: chefs. Celebrity chefs like Bobby Flay, Guy Fieri, Ina Garten, Gordon Ramsay, and Martha Stewart have been around forever and they’ve established themselves as experts in the field.

What does any of this have to do with Snoop Dogg? Well Snoop-a-Loop is super tight with Martha Stewart. They’ve done Comedy Central Roasts together. Snoop’s appeared on Martha’s show and the two have done the Emmy-nominated Martha and Snoop’s Potluck Dinner Party together. Snoop’s demonstrated his love of cooking and he’s earned the respect of Martha Stewart.

Last month (October 23rd), Snoop Dogg released a cookbook titled From Crook to Cook: Platinum Recipes from Tha Boss Dogg’s Kitchen and it’s packed full of 50 recipes from Snoop’s own kitchen including a lot of recipes for Thanksgiving.

Snoop Dogg sat down with Bloomberg for an interview where she shared his secret turkey and gravy tips that he learned from Martha Stewart and later perfected on his own. He talked about how to bring your Gin and Juice to the next level, the best leftovers, and what his favorite pre-Thanksgiving dinner snack is.

First up, here’s Snoop Dogg talking about his favorite snack on Turkey Day:

“Thanksgiving is one of my favorite holidays,” Snoop tells Bloomberg, “because it’s a double-hitter—you got good food and you got good football on the same day. I got a game-day menu in my book with plenty of munchies you can make before the main event. The best are the Suited and Booted loaded nachos. So easy and cheesy. All you do is spread your favorite chips on a baking pan, load ’em up with toppings, and bake in the oven. One pan slam.”

For his nacho recipe, Snoops adds everything you could wish for on a sizzling platter of chips: well-spiced ground beef, corn, black beans, Cheddar and Monterey Jack cheese, sour cream, and smashed avocado. “If you really wanna get your chips dipped and whipped, don’t just settle for some bland sauces,” he says. He reconfigures the nachos into another unlikely T-day snack, Soft Touch tacos. Snoop makes them with a similar chili-spiced ground beef and a colorful mix of toppings. (via)

I get it, but I don’t necessarily love it. Nachos are the perfect football food. And I never get too full off of nachos unless they’re colossal in some form.

The thing I like about nachos as a potential Thanksgiving appetizer/snack is you can make them as classy or casual as you want, and you can make the portions as big or small as you choose. It lets each person be in control of their portion control.

Here’s Snoop Dogg talking about his turkey and gravy tips:

“I always keep OJ in the fridge and oranges in my kitchen. Martha makes a lot of recipes with lemon, and it just made sense for me to use oranges since I love the flavor,” Snoop admits. “And ooh-wee does it work for turkey.” The rapper is an unofficial turkey expert. For years, he has given out birds to locals in Inglewood, Calif., in advance of Thanksgiving; people line up for hours.

“I’m always lookin’ for ways to use all kinds of herbs. Don’t they make everything better?” he continues. “I don’t get down with no bland turkey, and unless you add plenty of herbs in a thick rich coat of butter, nobody is getting excited about that bird. It’s the main event. It better have all that flavor.” (via)

There was one tip of his in From Crook to Cook: Platinum Recipes from Tha Boss Dogg’s Kitchen which I know will have a lot of people divided. Personally, I’m not one of those weird freaks who have something against mayonnaise so I’d be willing to try this. If he says it’s good then I’ll give him the benefit of the doubt, for now:

“This is where you load up that plate,” Snoop says. “And make sure you’re getting ready for the coming cold season. Even in Cali, in November the weather starts to dip, so no need to keep that beach bod. Just as well, ’cause you know I add that cream to give my mash that classic, buttery texture. It’s the holidays—relax your mind and let your conscious be free.”

Snoop’s reasoning: “Mayonnaise is another thing I always keep in the fridge. Adding it to mashed potatoes makes them taste so whipped and all fluffy, you wouldn’t believe it. Just don’t over-mash or it gets sticky.” (via)

Snoop also shared some tips on how to spruce up his infamous Gin and Juice cocktail which you can read here on Bloomberg. You can also purchase Snoop Dogg’s new book, From Crook to Cook: Platinum Recipes from Tha Boss Dogg’s Kitchen, on Amazon by following that link or hitting the ‘shop now’ button below.