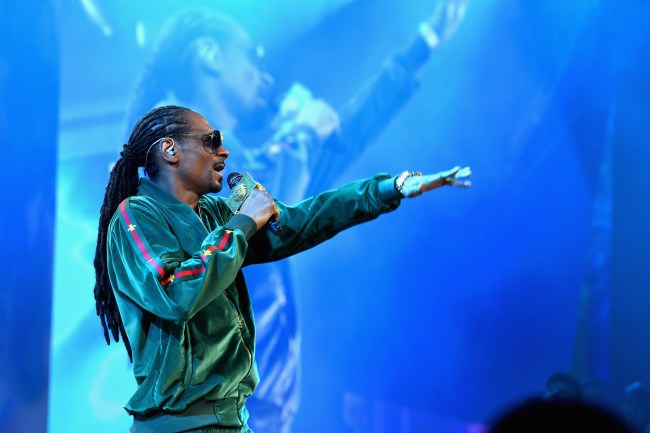 This one feels like a Guinness World Record that has been in the making for as long as I’ve known what world records are. Snoop Dogg‘s Gin & Juice music video (and song) is as iconic of a rap video as there ever was and the 1993 hit is still an absolute banger whenever it gets played.

The song was nominated for the ‘Best Rap Solo Performance’ at the 1995 Grammy Awards. It was a top 10 hit on the Billboard Hot 100, it features cameos from Dr. Dre and Nate Dogg, and now thanks to this song Snoop Dogg is the proud owner of a Guinness World Record.

Appearing on stage at the BottleRock Napa Valley festival last weekend with fellow rap legend Warren G and celebrity chef Michael Voltaggio, Snoop Dogg set the Guinness World Record for the world’s largest ‘paradise cocktail‘, a massive Gin & Juice poured into a container that appears to be large enough to be a baseball dunk tank that you’d find at a carnival:

According to the Mercury News, the record-setting Gin & Juice measured 550 liters (just over 145 gallons). It took 180 bottles of Hendricks Gin plus a shit ton of juice donated by Whole Foods. After setting the Guinness World Record for the largest Gin & Juice ever poured, The Regulators took the stage:

If you need your Gin & Juice fix after reading about this Guinness World Record from Snoop Dogg you can check out the 1994 music video here: