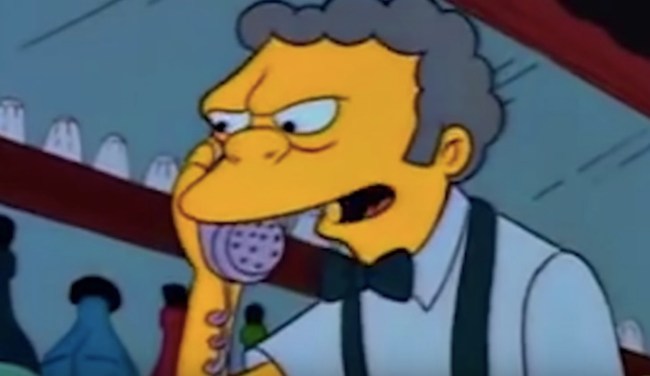 I haven’t had a morning commute that involved listening to ‘talk radio’ in so many years I can’t even remember what those shows are like, but I do recall prank calls being a regular bit on the shows in my area. Are they still? If not, where are the teens getting their prank call ideas these days, from The Simpsons or is it YouTube?

I’m already getting sidetracked. A.F.C. Fylde is a professional soccer team in England that plays in their fifth pro tier. They had an FA Trophy game yesterday against Ramsbottom United. Flyde won the match 4-1 but lost the war because they had to make an apology early this morning on Twitter after their stadium announcer was duped by three cheeky lads into making a crass statement over the loudspeaker.

This is a prank straight out of Bart Simpson’s playbook. You give the person a seemingly innocent name or statement but when it’s spoken aloud it sounds crass. Bart would phone up Moe at the bar and Moe would fall for it every time.

In this instance, the three soccer fans told the stadium announcer that their dad’s car was stuck and they needed someone with a very specific license plate to move their vehicle so they could get their car out. When read aloud, the license plate carried a raunchy message. The team shared a series of tweets acknowledging their gaffe and poking fun at the announcer’s mistake.

WANTED: This trio pictured in the middle.

CRIME: Rather cunningly duped our stadium announcer into asking for a white Nissan Micra NE14 ABJ to be moved last night.

"My dad's blocked in and it's an emergency – could you read this out?"

Aye, an emergency is it lads? 🤨 pic.twitter.com/vJR0m8OgzH

Sod it, whilst you're all here, let's watch the master at work.https://t.co/QoXAlXK0eg

On the off chance that went over your head, read aloud that would be ‘N E 1 4 A B J’ or ‘Anyone for a BJ?’ That last tweet links to a YouTube clip of Bart Simpson’s best prank calls and it’s fan-fucking-tastic. Check it out if you need a reminder of how good The Simpsons used to be.

Naturally, fans had all sorts of reactions to A.F.C. Fylde falling for one of the oldest tricks in the book and those fans let them have it on Twitter.

I think it's owned by Amanda Hugginkiss, ask for them next time

These lads should get guest of honour for next game!

Give those little lads a medal

The joke’s been around for 20+ years but I suspect the stadium announcer who fell for this gag is probably older than 80 and isn’t as sharp as s/he once was. That could be a terrible assumption on my part but this strikes me as a job that someone gets and holds onto for like five decades just to score the free tickets.