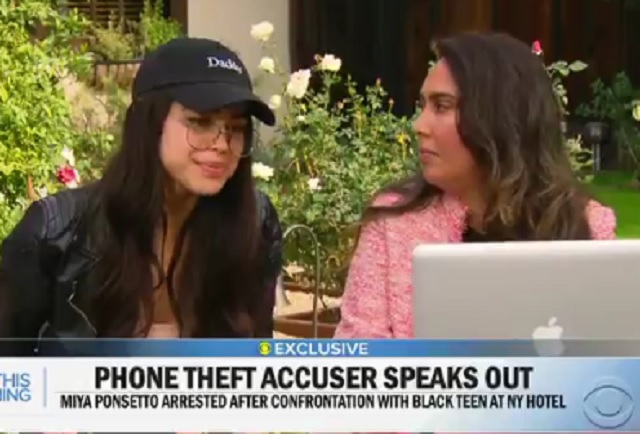 Miya Ponsetto, the woman seen in a viral video falsely accusing the 14-year-old son of jazz trumpeter Keyon Harrold of stealing her iPhone and proceeding to attack the teenager inside of a hotel in Manhattan has now been arrested in California. The 22-year-old was apprehended by Ventura County deputies on Thursday and is being held without bail as she waits to be extradited to New York City to face charges for the alleged assault.

Keyon Harrold Jr. attacked by ‘Soho Karen’ who accused him of phone theft in new video

New video has emerged showing the woman who falsely accused Keyon Harrold Jr. of stealing her iPhone attacking the teen and tackling him to the floor. pic.twitter.com/hJcfQEmh8B

The NYPD had issued a warrant for Ponsetto’s arrest and detectives recently traveled to California to question her about the attack.

But she wouldn’t stop until she pulled up to her home — and even then refused to get out of her car, police said.

“She tried to slam the door on one of the deputies and that’s when they just reached in and forcibly removed her,” department Capt. Eric Buschow told the Associated Press, adding that the sheriff’s office would request that county prosecutors charge her with resisting arrest.

Hours before her arrest Ponsetto sat down with CBS’s Gayle King and delivered a bizarre on-camera interview that made her look worse in the process.

The 22-year-old woman caught on camera allegedly physically attacking a 14-year-old Black teen and falsely accusing him of stealing her phone was arrested in California.

In an exclusive interview, Miya Ponsetto and her lawyer spoke with @GayleKing hours before she was arrested. pic.twitter.com/ezaGkcWZ8j

During the interview, Ponsetto shushed King and told her “enough” when King was trying to explain to her why it was wrong to falsely accuse and attack a black teenager.

Ponsetto once again pissed off the Internet by giving Gayle King an attitude during her interview.

Oh Hell No. "Alright Gail, Enough." ???Trying to shut down @GayleKing with a demeaning bow down hand gesture and … (4:40)

Gayle, as always, was great in this interview https://t.co/YnN8WNFTjM

Y’all are NOT ready to get in the ring w/ @GayleKing. She gonna slow walk you into your own confession. And she’ll do it calmly and measured, using only footage, the facts, and your own words agasint you. This was a pleasure to watch. https://t.co/4JIDmW0B1q

The video of this deranged woman who assaulted an innocent boy is instructive. She says she considers herself to be “super sweet.”

Bad guys do not see themselves as bad guys. They think they’re the heroes in the story. https://t.co/IRS6UT5Upj