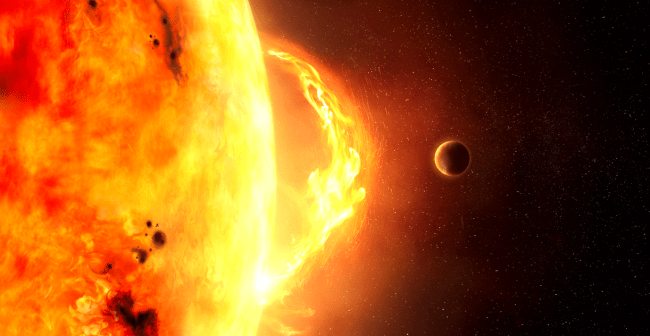 Several solar flares and solar filaments near massive Sunspot AR3089 have been exploding this week opening up what Spaceweather.com is calling a “canyon of fire.”

The walls of this canyon have reached nearly 20,000 kilometers (12,427 miles) in height, nearly five times as long, and is so big that Earth would disappear inside of it.

An X-class solar flare is the most strongest class of flare, capable of producing as much energy as a billion hydrogen bombs.

What this means for us is flares such as this have the potential trigger a tremendous geomagnetic storm in the Earth’s atmosphere. This, in turn, could result in damage to infrastructure and satellites and the disruption of electromagnetic communication systems (affecting GPS systems and even giving airline passengers near the North and South poles small doses of radiation).

For example, last Friday, parts of Europe and Africa experienced a brief radio blackout due to a M-class (the second highest level) solar flare from Sunspot AR3089.

A massive solar flare could knock out satellites and if strong enough, shut down the internet

“Some effects from these events could include limited blackout of HF radio communication on the sunlit side of the Earth, loss of radio contact for tens of minutes, and/or degradation of low-frequency navigation signals for tens of minutes. The disruption to the ionosphere could also impact amateur radio operator’s signal, causing it to fade at certain frequencies,” National Oceanic and Atmospheric Administration (NOAA) reported.

Today the Sun released another solar flare! 💥 Solar flares are intense bursts of radiation from the Sun that can be seen as bright flashes of light. Today’s M-class – or medium-sized – flare was captured by NASA’s Solar Dynamics Observatory. pic.twitter.com/FQYoNnJNAq

These powerful solar flares create what is known as coronal mass ejections (CME), or large expulsions of plasma and magnetic field from the Sun’s corona.

According to NOAA, they can eject billions of tons of coronal material and “travel outward from the Sun at speeds ranging from slower than 250 kilometers per second (km/s) to as fast as near 3000 km/s. The fastest Earth-directed CMEs can reach our planet in as little as 15-18 hours. Slower CMEs can take several days to arrive. They expand in size as they propagate away from the Sun and larger CMEs can reach a size comprising nearly a quarter of the space between Earth and the Sun by the time it reaches our planet.”

The strongest recorded solar flare to hit Earth occurred in 1859 in what is referred to as the “Carrington Event.” That particular solar storm caused telegraph wires to burst into flames.

In 1921, the “New York Railroad Storm” also caused fires in electrical equipment and telegraph control rooms all over the world, while in 1989 a moderately strong solar storm knocked out power in northeast Canada for nine hours.

Dr. Jeffrey Love, a Geophysicist in the Geomagnetism Program of the US Geological Survey, said last year that long-distance communication cables are most at risk with a solar superstorm.

That could lead to an internet apocalypse where networks go offline for months.