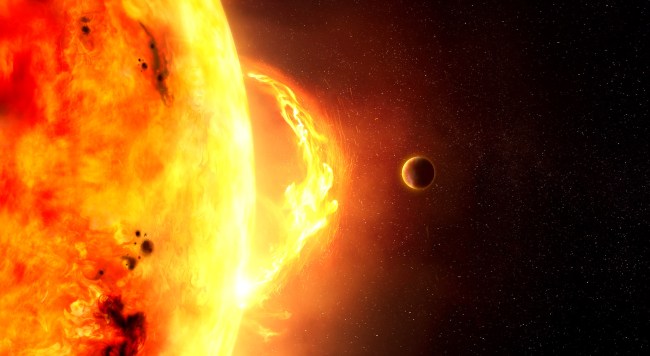 According to University of California Irvine assistant professor Sangeetha Abdu Jyothi, the underwater cables that connect the world’s internet could be affected and go offline for months as a result of the next solar storm, or superstorm.

This new research, presented at the annual Special Interest Group on Data Communication (SIGCOMM) data communication conference, warns that the current cables being utilized are inadequately protected from the kind of radiation, or “solar wind,” produced by a solar superstorm.

A severe solar storm could cause something called a coronal mass ejection (CME), which if big enough could penetrate the Earth’s ionosphere and disturb the planet’s magnetic field.

Earth’s magnetic field not being altered is crucial in today’s world as it’s one of the bases of the concept of electromagnetism, which powers electric motors and generators.

“What really got me thinking about this is that with the pandemic we saw how unprepared the world was. There was no protocol to deal with it effectively, and it’s the same with internet resilience,” Jyothi recently told Wired. “Our infrastructure is not prepared for a large scale solar event.”

6/ By chance, modern technological advancement coincided with a period of weaker solar activity.

In short, we have NO IDEA how resilient the current Internet infrastructure is against the threat of CMEs!

At least three times in the past 200 years an event such as this has occurred, in 1859, 1921 and 1989. The first time was so bad it got its own name – the Carrington Event. That particular solar storm caused telegraph wires to burst into flames.

In 1921, the New York Railroad Storm also caused fires in electrical equipment and telegraph control rooms all over the world, while in 1989 a moderately strong solar storm knocked out power in northeast Canada for nine hours.

As Jyothi points out, it’s not necessarily the undersea cables themselves that are of main concern, it’s the fact that they all have electrically powered repeaters.

Dr. Jeffrey Love, a Geophysicist in the Geomagnetism Program of the US Geological Survey, tells The Independent that long-distance communication cables are most at risk.

“The long, large-scale electricity systems are grounded because you seek stability in the operation of your power grid or your telecommunication cable. And normally the earth by grounding it to the earth provides that stability, but it’s during a solar storm that it doesn’t. So that’s the kind of paradox,” said Love.

“They are exposed to the magnetic storm hazard because they have these components called repeaters that are grounded. So yes, the long telecommunication cables are also vulnerable.”

Dr. Scott McIntosh, deputy director of the National Center for Atmospheric Research, told NextGov.com, “Strong solar storms can charge the atmosphere and prevent signals from getting through for days. The strongest can damage or even destroy satellites.”

McIntosh also believes, according to his research, that there is an estimated 35% to 45% chance a solar superstorm will disrupt Global Positioning System (GPS) service, potentially for several days, at some point within the next decade.

“Even with the most concerted government efforts, five or six years will be needed to establish systems and encourage, or where needed, require, users to protect themselves and vital services,” warned Dana A. Goward, president of the Resilient Navigation and Timing Foundation. “Such a timeline will take us well into the coming solar danger zone.”