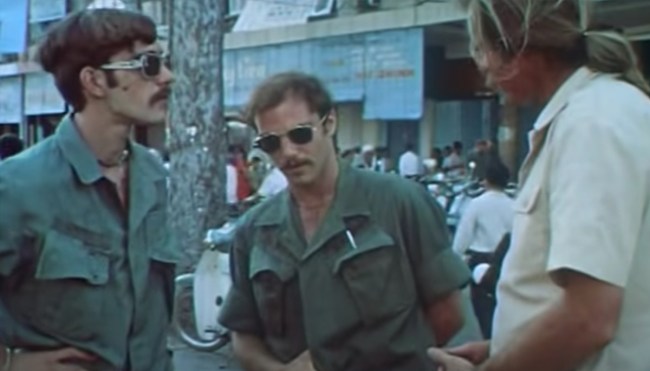 When I was a freshman in college, I sincerely uttered the words “I can learn more watching Vice documentaries than going to lectures” in a conversation that still makes me cringe when I think about it over a decade later.

With that said, the insufferably edgy media company did produce some fantastic content that frequently revolved around dispatching a human embodiment of Williamsburg to report on dangerous conflicts or do weird drugs in a foreign country at its peak in the early 2010s (a style that was expertly parodied on an episode of Documentary Now!).

However, as I discovered when I recently stumbled across an old clip from the 1972 documentary Weed that was uploaded to YouTube over a decade ago, Vice was far from the first outlet to take that particular approach.

In 1965, America sent thousands of troops to Vietnam in the name of combating communism at the start of a conflict that (as most people know by now) did not exactly pan out as the United States had hoped.

If you’ve watched any movies about the Vietnam War, you’re likely very familiar with the amount of discontent felt by many soldiers that was echoed by plenty of their fellow citizens back home—as well as the various extracurricular activities they engaged in to cope with their situation.

During the Vietnam War, some filmmakers spoke with American troops stationed in Tam Hiệp after getting a tip that marijuana (or, as it was referred to back in the day, “dope” and “grass”) and other drugs were not exactly too hard to find.

During conversations with multiple GIs, the correspondents discovered it was possible to purchase a pack of joints for less than it would cost you to buy cigarettes (they also learned heroin use had been fairly rampant with soldiers but had fallen out of favor due to the negative effects of the drug). They then proceeded to track secure a box labeled “Park Lane Cigarettes” for a little over $1, which was packed with prerolls they dissected before sparking one up.