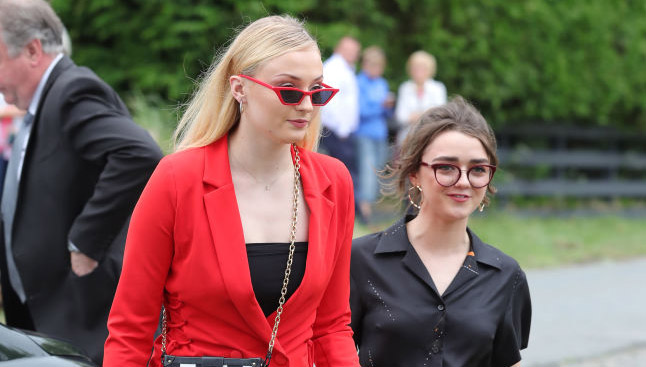 Sophie Turner and Maisie Williams have been the best of friends ever since they began playing sisters Sansa and Arya Stark on Game of Thrones back in 2011.

And while Turner ,22, has been teasing fans about the final season of Game of Thrones, without actually revealing anything, and Williams, 21, has been a lot more quiet ever since she may or may not have dropped a spoiler about season eight, there is one thing about the two of them that can’t be spoiled: their amazing friendship.

While at this year’s New York Comic Con to promote her upcoming Dark Phoenix movie, Turner spoke to Vulture about her relationship with Williams.

Turner said the two actually met while auditioning for their star-making roles. “We did a chemistry read together,” said Turner. “It was the final three for Sansa, and I was like, Fuck, I really need to up my game. I went in, and was I like, What’s up?! I gave her a big hug. I was like high-five after every take. I was super extra, but it worked. I read with other Aryas before, but Maisie was special. We just got on like that.”

Turner also shared some interesting details about how crazy the secrecy is surrounding the upcoming final season of Game of Thrones. She said that the show has a completely different title, the actors’ names are changed on the script and the call sheets, they shoot fake scenes, and they even have a “drone killer” that shoots down anything that tries to fly above the set to see what’s happening.

“I don’t know how it does it. It creates like this field around and the drones just drop,” she tried to explain.

In addition to that, Turner also spilled on the very unusual way she and Williams like to decompress after filming.

“We’re kind of like loners on Game of Thrones, just because the past few seasons Maisie and I have sleepovers every night when we’re shooting. Or every night whenever both of us are in town,” shared Turner. “We just used to sit there and eat and watch stupid videos and smoke weed. I don’t know if my publicist will kill me for saying this. We’d get high and then we’d sit in the bath together and we’d rub makeup brushes on our faces. It’s fun.”

Read the entire interview over at Vulture.com.