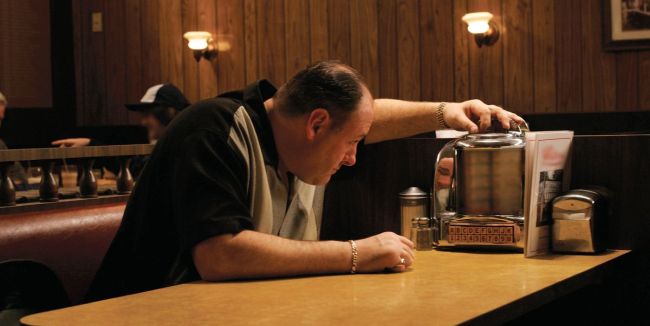 Despite the fact that I’d never seen an episode of The Sopranos prior to its conclusion in the Summer of 2007, I actually tuned into the finale when it aired because it was simply that big of a deal — that even 14-year-olds who’d never seen the show before still decided to catch the iconic series’ climactic episode.

Oddly enough, while I’d had no previous experience with The Sopranos, my reaction to that cut-to-black-ending was identical to that of longtime fans, as essentially everyone tuning in back on June 10, 2007: we thought our cable went out.

Whether or not you enjoy The Sopranos‘ ending is a different conversation for a different day. What’s not up for debate, though, is how memorable the ending remains, and that’s largely due to its inclusion of Journey’s “Don’t Stop Believing”, which creator David Chase recently revealed wasn’t always his choice of song for the finale.

On a new episode of the Talking Sopranos podcast, which is hosted by two of the show’s stars, Michael Imperioli and Steve Schirripa — who played Christopher and Bobby “Bacala,” respectively — Chase was asked about how he landed on arguably Journey’s signature hit. Chase said he was driving around in a van with crew members, and he hit them with some of his choices. He had three. He can’t remember the second one. But the first, which was not picked, was [drum roll] “Love and Happiness,” by Al Green.

“Love and Happiness” is, of course, not a cheesy ’80s power ballad. It’s a silky, smooth, reflective number, revealing a contentment that James Gandolfini’s Tony never quite found. Thing is, Chase says, the crew members in the van weren’t hot for “Don’t Stop Believin’.” “Everyone went, ‘Oh, Jesus Christ, no!’” he recalled. “And I thought, ‘That’s the one.’” [via Uproxx]

Regardless of what song Chase ultimately went with, the shock of the screen cutting to black likely would’ve maintained the same impact.