My Brain Doesn’t Want To Speak A Second Language, Neither Does Yours 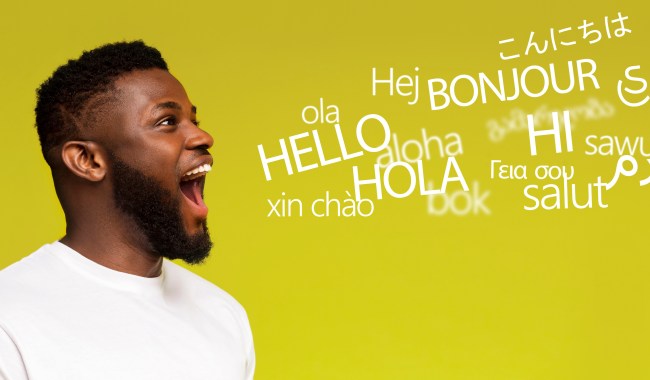 Perhaps one of my biggest regrets in this life is that I never learned a second or even a third language. Well, that and not being more of a world traveler and not sleeping with a lot more women. But failing to become a cunning linguist, man, that’s something that still haunts me to this day.

When I was a young punk, raising nine kinds of hell on the mean streets of Southern Indiana (and yes, that statement is brimming with sarcasm), I thought it was a waste of time to crack open the books. Much less one full of gibberish intended to teach people how to do things like order Mexican food without numbers. “I’m never going to use that crap,” I remember telling my high school guidance counselor one semester after she tried conning me into taking a Spanish class.

It wasn’t until adulthood when I finally realized that having the ability to speak a different language or two was a sure-fire way for a guy to open up a wealth of exciting opportunities. Like, I could be working as an operative for the CIA right now, on a mission to save the world from alien terrorists with seven dicks. Instead, I’m sitting here typing out this column in a pair of dirty underwear and arguing with my girlfriend via text. (Am I the only one annoyed when they simply respond with “K?”) And of course, being a government spook would have allowed me to see more of the world and experience more romantic entanglements. Ugh, retrospect is the worst!

By the time I took an interest in a second language, however, life had already slung me around by the balls a few times. At twenty-five, I had already quit or been fired from approximately 700 jobs, endured a nasty divorce (the first one is the hardest), and was spending every last dime that I had at the strip clubs. I was always starting over, so there wasn’t a lot of time for continued education. Still, I was hellbent on going multilingual. Only it wasn’t going to be Espagnol. No, sir, I would continue to order off the menu at Mexican restaurants using the tried and true numeric system. That’s what it’s there for! I was going to learn French – the language of love. Oui! I just knew one day I would end up in Paris, perhaps writing my 800-page rendition of the classic tale “boy meets girl, girl disembowels boy,” and I didn’t want to look like another idiot Américain. I wanted to fit in, take six-hour lunch breaks like a real Parisian, and enjoy my beverages without ice.

And even if I never got to France, it didn’t matter. I was one-hundred percent sure that being fluent in the sexiest language known to humankind would eventually help me with the ladies right here in the United States. After all, you can say some of the dumbest crap imaginable to a woman in French and still fare better than the average meathead bumbling his way through “Can I buy you a drink?” Hell, “I farted” even sounds seductive in French. So off I went to learn the language.

But you know, working full time, drinking, and spending more hours a night trying to become either one of this century’s most adored or hated writers sort of put a cramp in my studies. It was long before those fancy language learning apps were teaching people to speak in tongues in seven minutes or less. I used the library and books like “Easy French” and “French for Dummies.” By the time apps were a thing, I just thought Rosetta Stone was the name of a civil rights activist or the newest Harry Potter film. Let’s just say that my aspirations for learning a second language never really came to fruition. I eventually decided to stick with English. It was tricky enough.

It’s challenging to learn a new language as an adult. Unless a person is willing to drop all of the other crap they have going in their lives, like girls, booze, and the combination of the two, going multilingual is tougher than one might imagine. And no, my inability to learn French years ago had less to do with me being a distracted moron hooked on titty bars and more to do with science. A recent study in the Journal of Neuroscience shows that the adult brain sort of goes haywire when speaking a new language. Researchers say that while we are fully capable of learning “a vast variety of languages” in our lifetime, our grown minds will not allow us to speak them with much savoir faire. But don’t let that stop you from trying. By all means, you and Miss Rosetta Stone have a great time. As for me, I’m about to order a #45 from the Mexican place up the street.