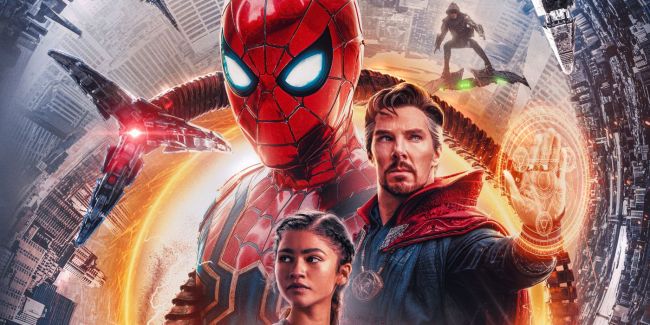 After a truly behemoth marketing effort that was partially propelled by literal years of rumors, speculation, and fan theories, Spider-Man: No Way Home is just days away from releasing in the United States.

As the trailers have confirmed — as Green Goblin, Doc Ock, Electro, Sandman, and Lizard were all teased in the marketing materials — No Way Home is an absolutely massive comic book movie film, perhaps one of the biggest of all time. And as I’m now able to confirm, that spectacle translates to enjoyment with aplomb, as No Way Home is sure to please and thrill virtually every fan of the iconic Marvel wallcrawler and web-slinger.

However, given the nature of the film, it’s quite difficult to discuss without wading into spoiler-territory, so with that in mind, we’ll do a mini-review of the film in general, then we’ll delve into further details and plot points, namely, Peter Parker’s arc and Tom Holland’s performance, the conflict with Doctor Strange, and the many multiversal villains that appear.

Spider-Man: No Way Home, unsurprisingly, is A LOT of movie — it’s absolutely MASSIVE — and with that seismic scale comes everything that fans of the character and franchise are hoping for.

Granted, while some of the plot devices to set the stage are a bit silly — Peter Parker, in my opinion, tosses all logic out the window — that also doesn’t really matter given the sheer spectacle of it all, as No Way Home is easily one of the grandest MCU films yet, behind only Avengers: Infinity War and Avengers: Endgame.

In addition to being the funniest MCU Spidey film so far, which is surprising given the darker tone, it’s also easily the best performance Tom Holland has given as Spider-Man, as he’s asked to do a lot — comedy and drama and exposition — and nails it all. Holland absolutely crushes it and displays acting range that I’m not sure many fans knew he had.

As for the villains, seeing so many iconic characters both converse and interact is thrilling in the purest sense — comic book movie fans have never seen anything like this and certainly will be blown away by them all, especially in terms of Green Goblin’s and Doc Ock’s arcs.

That’s not to say that the film is perfect, as my biggest gripe is the decision-making of both Doctor Strange and Spider-Man, which registers as absurd at best. Wonky plotting aside, though, No Way Home is everything fans could’ve wished for and then some.

Let’s start with Peter — I was relatively impressed by how, despite all of the plot elements at play, this very much remains a *Peter Parker* story and continues the arc that began with Homecoming and Far From Home. That was also elevated by the fact that I think Tom Holland gave his best performance as Parker, Infinity War included. Holland is asked to do a lot — he’s quipping and he’s crying and he’s explaining what the hell is going on — yet he manages to carry every aspect of the performance. In a film with so many characters, he very much carries the show and guides the ship, with No Way Home providing a satisfying continuation of the plot and character arc that began with Spider-Man: Homecoming.

Ahhh, Doctor Strange. While easily my favorite Avenger, he’s quickly becoming one of the most foolish, as his apparent carelessness — whether that be in the context of his lack of appearance in WandaVision or his willingness to cast a clearly dangerous spell for Peter in this film —  is virtually unraveling all of the excellent work he put forth in the battle against Thanos.

Heading into No Way Home, I was hoping the film would provide an explanation as to why Doc Strange has been playing so fast and loose with the mystic arts, but unfortunately, I didn’t feel like this was resolved. I still don’t know what the hell is going on with Doctor Strange’s decision making and this film didn’t really help answer that. Remember, this is a guy who once told Tony Stark that it’s his sole duty to “protect your reality, douchebag”, and yet now he’s casting spells at the whim of a teenager he met in space one time.

What you see in the trailer is basically what you get — Peter asks him to do a spell and it immediately goes haywire, with Strange virtually blaming the teenager for everything that unfolds without looking inward at his hand in the catastrophe.

That said, out of Doc and Spider-Man, Strange is very much the reasonable one: he understands the dangers of the multiverse and immediately tries to neutralize the threat, and almost succeeds if not for Peter’s naivety, which is the crux of the film and set the plot further in motion

As the trailer has confirmed, Green Goblin, Doc Ock, Lizard, Sandman, and Electro all appear. Goblin and Doc easily have the most compelling arcs, while the other three are essentially window dressing and seem to appear for the sake of having as many villains as possible. That’s not to say that it sinks the film, like what happened in 2007’s Spider-Man 3, but perhaps there’s an argument to be made that the time would’ve been better served with the O.G. Spidey villains, Willem Dafoe’s Green Goblin and Alfred Molina’s Doc Ock. To be fair, though, out of the villains, that duo is easily given the most screen time and the most to do in terms of impacting the plot.

Speaking of those two, seeing them interact — and being aware of each other and their pasts (Ock calls Osborn and brilliant scientist and also fills in Peter on how he died in the original film) is inherently thrilling.

Whether you’re a fan of Spider-Man, the Marvel Cinematic Universe, or blockbuster movies in general, Spider-Man: No Way Home, against all odds, lives up to the unprecedented hype, delivering a comic book movie on the grandest possible scale while also still effectively telling a compelling, heartfelt Peter Parker story.