The New ‘Spider-Man: Into The Spider-Verse’ Trailer Reveals An Incredible Voice Cast 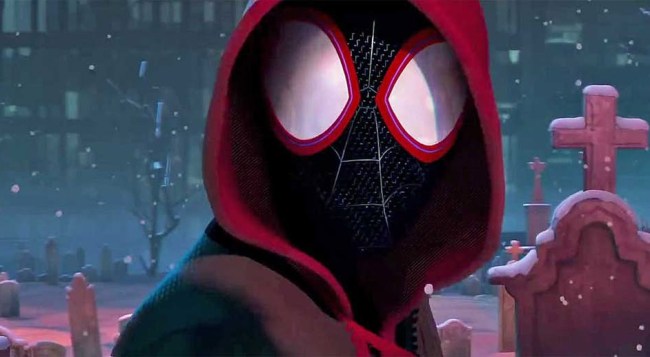 What do you do if you have access to one of the most iconic comic book superheroes of all time and you can’t seem to make movies about him that rarely seem to do the character justice? If you’re Sony, and that character is Spider-Man, you go back to the drawing board one more time and you give making movies about him in cartoon form a shot like they’ve done with the upcoming Spider-Man: Into the Spider-Verse.

The first trailer for the animated Spider-Man: Into the Spider Verse was released on Wednesday by Sony Pictures along with a finalized list of the extremely talented voice cast.

In addition to Shameik Moore as the film’s star Miles Morales, we also get Liev Schreiber playing Kingpin, Mahershala Ali as the Prowler – aka Miles Morales’ uncle, Lily Tomlin as Aunt May, Hailee Steinfeld as Spider-Gwen – aka Gwen Stacy, and Jake Johnson as Morales’ mentor, Peter Parker.

Not only that, based on this first official trailer, it appears that Sony is going to try to create an actual Spider-Verse that can be used for a series of films down the road.

Producers Phil Lord and Chris Miller (The Lego Movie, 21 Jump Street) told Variety, “We are lucky to have such an amazing cast of funny, genuine creative souls to populate the Spider-Verse. They have generous minds and great big hearts. And they have very talented throats. Which is where their delightful voices come from. We can’t wait for the world to see Miles Morales on the big screen. He’s such a fun and exciting new character, and telling his story through a revolutionary visual style makes for a totally fresh cinematic experience that, if we may say so, is freaking amazing.”

Spider-Man: Into the Spider-Verse hits theaters on December 18, 2018.