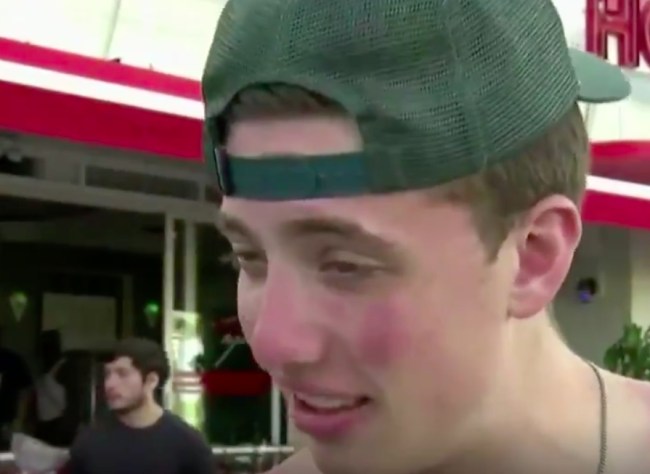 I’m no longer a college kid, nor do I pretend to be, but, damn, spring break must’ve really sucked for those who still are. While we’re all getting a makeshift work-from-home staycation thanks to the pandemic that’s spreading across the world right now, we saw flocks of 20-somethings still go on vacation to soak up the sun in order to party their asses off — which was ignoring the desperate call of action from government officials who preached social distancing — making for a less than thrilling getaway.

While nearly all of these spring break kids came across as tone deaf given the severity of the situation going on around the world, one guy stepped up and became the (unfortunate) voice of his generation. That would be a dude by the name of Brady Sluder, who was famously seen telling reporters that he wasn’t going to let the coronavirus ruin his fun, adding that “at the end of the day, I’m not gonna let it stop me from partying,” regardless of if he contracted the virus or not. Take a look at the now viral video below.

“If I get corona, I get corona. At the end of the day, I'm not gonna let it stop me from partying”: Spring breakers are still flocking to Miami, despite coronavirus warnings. https://t.co/KoYKI8zNDH pic.twitter.com/rfPfea1LrC

If you had the urge to dump a beer on every single one of the spring breakers in that video, you’re not alone. Naturally, people were pissed off about the lack of empathy, responsibility and awareness from the 20-somethings — which, if we’re being honest, shouldn’t come as a surprise given their age. Still, look at some of the reactions from Twitter below after seeing the video.

Our grandparents were asked to go to war we asked these assholes to stay home on the couch and they can’t even do that.

The "It's ALL About Me" Generation

Luckily, ol’ bro Brady has awaken from his drunken slumber and got with the program, issuing an apology for the idiotic way in which his 15 minutes of fame was spent. Here’s what the college kid had to say after realizing how bad the pandemic situation really is.

Look, as a 20-something-year-old kid, we all say and do stupid shit, so Brady should be forgiven for saying what he did. He was probably in the midst of a 36-hour bender with next to no sleep, a copious amount of alcohol, pretty ladies all around him and the Florida sun beating down, so his focus may have been a little blurred.

While he came across as a moron during the interview, let’s all give him credit for manning up to the mistake and apologizing — because it’s not like he had to do it. Hopefully he and these other kids on spring break learned from all this and they can get back to chugging cheap beers on the beach again soon once this is all over.