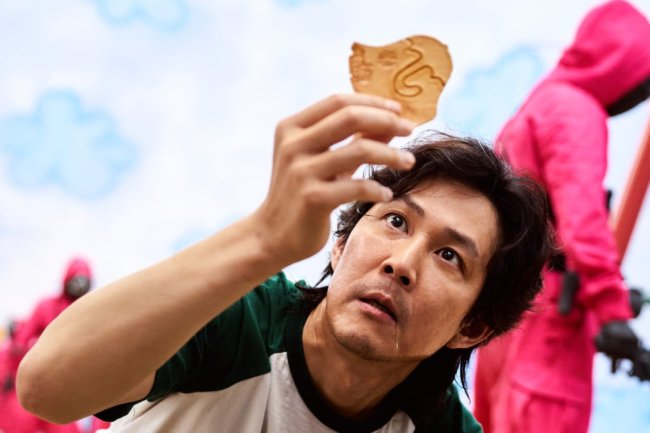 It’s safe to say that The Squid Game on Netflix is a dystopian sensation. It seems like everyone and their brother is watching it or has already binged it, making it one of the most buzzed-about series in recent memory. I’m already prepared to see many Squid Game costumes for Halloween this year – the masks and colorful costumes are just too easy.

According to Netflix co-CEO Ted Sarandos, the Korean thriller is well on its way to being Netflix’s biggest non-English show, with a “very good chance” of it being the streaming platform’s biggest show of all time.

The show is eerie and disturbing and filmed in this creepy cheerful way that makes it totally worth your time. Yes, it’s dubbed with subtitles, but it’s easy to get past it once you’re emotionally invested in it. I don’t want to give anything away, but I can’t stop watching it. The best way to describe it, in a nutshell, is a little bit of Black Mirror, a little bit of The Hunger Games, and a little bit of Birdbox.

Not to go full literary dork, but it also reminds me of Richard Connell’s famous short story, The Most Dangerous Game – required reading in many-a high school English class.

If you haven’t watched the show yet, you should probably just hit the backbutton or visit our wonderful homepage here at BroBible because the rest of this post won’t make any sense. Spoiler alerts ahead.

If you have watched The Squid Game through Episode 3, The Man with the Umbrella, you’ll probably be deeply invested in how hard the Squid Game cookie challenge actually is. This episode made my palms sweat.

The cookie challenge in The Squid Game doesn’t actually feature a cookie in the traditional American sense. It’s really a Korean candy called dalgona. It’s a spongy, toffee-like sugar candy with a consistency similar to honeycomb. It’s very thin and wafer-like, which means it breaks off easy – which is why the challenge in the show is so anxiety-inducing.

Dalgona is actually pretty easy to make – it’s basically just a mixture of sugar and baking soda. After looking at some recipes, it’s as simple as melting one tablespoon of sugar in a metal ladle or tiny pot on low heat, stirring it so it melts consistently. Then add a little pinch of baking soda and keep stirring. Then it will develop the liquid consistency of honeycomb, which you can pour onto baking paper.

At this point, just press it flat and apply a cookie cutter to make a shape.

If you’re interested in making it at home to try yourself, here’s a link to a simple recipe, along with some examples from TikTok.

Game over, as you know by now, is death.

TikToker Susi.Vidal made some homemade dalgona and gave the Squid Game cookie challenge a try.

It’s a masterclass on just how hard it’d be to actually survive Game #2 on the Netflix show.

As promised, a few examples of how to make the dalgona.

I can’t wait to give this a try when I finish the show in the next couple days.