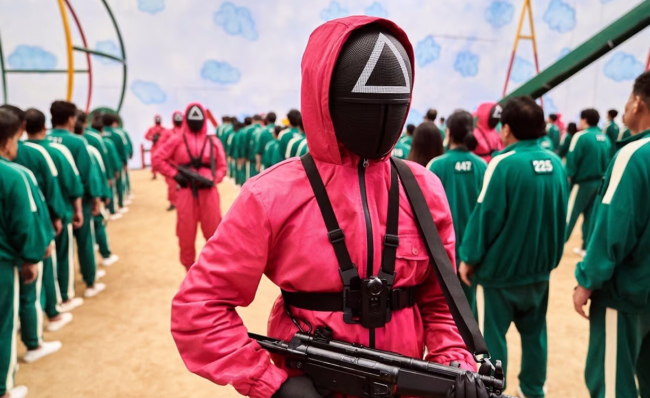 While confirming that there are indeed plans for a second season of the surprise Netflix hit series Squid Game, (How could there not be?) the show’s creator and director Hwang Dong-hyuk revealed that he almost went with a different, alternate ending to the show’s season finale.

Speaking to the Associated Press at a screening and Q&A in Los Angeles for the show, Hwang admitted that he chose to end the season on a cliffhanger to leave questions in the mind of the viewer.

“We actually wrestled between two different scenarios for the ending,” Hwang explained to EW.com. “There was one, the other alternate ending, where Gi-hun would get on the plane and leave. And then there was of course the one where he would turn back and walk towards the camera. We constantly asked ourselves, is it really right for Gi-hun to make the decision to leave and go see his family, to pursue his own happiness? Is that the right way for us to really propose the question or the message that we wanted to convey through the series?”

Monday night, Hwang told the Associated Press, “There’s been so much pressure, so much demand and so much love for a second season. So I almost feel like you leave us no choice! But I will say there will indeed be a second season. It’s in my head right now. I’m in the planning process currently.”

He knows, however, that after creating the most viewed show on Netflix ever expectations for the second season will be sky high.

“When you look at the fans’ expectation, it’s very difficult,” he admitted. “I go on YouTube and see all of these fans imagining what the second season should be like or will be like, and their imaginations are really running wild. If there were to be a second season, I think I am going to stick to the basic story line that I have in mind. And I can only hope that it will not only meet the fans’ expectations, but go beyond that. Their expectations are truly immense and very diverse, so I think it’s going to be very difficult to pinpoint exactly what the fans want.”

Check out the full interview with Hwang Dong-hyuk over at EW.com.