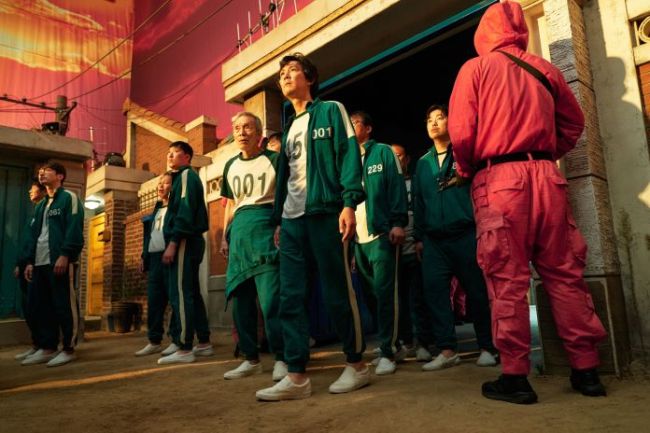 Netflix’s Squid Game is a global megahit and the conversation about the not slowing down any time soon. Now that more and more audiences have finished streaming the series, Squid Game fan theories are starting pop up like weeds, especially on platforms like TikTok and Twitter.

And the Internet can’t get enough.

If you’ve watched the hyper-violent, dystopian Korean thriller, you know that these Squid Game fan theories are a bit like a drug. The show has a remarkable way of gnawing at your brain. Everything about Squid Game just sucks you in from the start, starting at the premise in the Red Light, Green Light episode: People in debt “disappear” to a mysterious island where they bet their lives playing children’s games in order to win a big, gross pile of cash.

With that comes greed, betrayal, heartbreak, jealousy, and the whole spectrum of human nature at its ugliest.

Some are calling it “dystopian,” but the reality is that Squid Game is really a “what if” mortality tale around the idea of money and the very false premise that it solves all your problems.

Netflix co-CEO Ted Sarandos said that Squid Game is on pace to be Netflix’s biggest series of all time. Just to get a sense of how immensely popular it is around the world, the New York Times calculated that more than 14 billion videos with the hashtag #SquidGame on TikTok in just over two weeks.

Tiktokers are using the platform to do everything from the Squid Game cookie challenge to animating the creepy red light, green light doll.  An ISP in South Korea is even suing Netflix for the spike in bandwidth caused to its network by the show – that’s just how popular it is.

It’s safe to say that the show is a full-on cultural phenomenon.

DO NOT PROCEED IF YOU HAVEN’T FINISHED THE SERIES

I finished the show last night. Once my palms stopped sweating from the Glass Bridge episode, I immediately dove into a Squid Game fan theory rabbit hole.

The end of the show leaves a pandora’s box of question marks.

The biggest twist – a moment I genuinely gasped aloud – is around Player Number 1, the old man Oh Il-nam (Oh Young-soo).

Oh Il-nam is depicted throughout the show as a wise and harmless old man with dementia. He says he’s emotionally invested in playing the games as one last thrill before succumbing to a brain tumor.

We think he’s killed off in Squid Game Episode 6, Marble Game, after Gi-hun uses his failing memory to win the game. The twist: Oh Il-nam tells Gi-hun that he knew he was being played, basically bringing out the very worst in Gi-hun.

Gi-hun feels immense guilt for being so manipulative to his closest pal, leading to his death off-screen.

But it turns out that death never really happened. We hear a shot, but Gi-hun’s true identity as the host of Squid Game is revealed in the show’s final act.

Turns out that the frail old man, now on his deathbed, was the mastermind behind the twisted games.

That special father-son relationship between Player #1 and Player #456?

What if the old man is actually Gi-hun’s father?

Many on Internet are speculating that Season 2 of Squid Game will include some kind of Star Wars-esque Luke Skywalker / Darth Vader style reveal.

TikToker @RuthBellPan points to a handful of clues suggesting that Player #1 and Player #456 are related:

Let’s break down the clues suggesting the Old Many in Squid Game is Gi-hun’s dad:

Clue #1 – In front of the old man, Gi-hun is offered some milk and asks for chocolate milk because he’s lactose intolerant. The old man says “I’m willing to bet you got spanked a lot as a little kid.” Gi-hun declared “How did you know?” The old man answers “My son was just like you, friend.”

Clue #2 – In the beginning of episode 6, before learning that they must compete against each other, the old man says “You know, as a kid, I lived in a neighborhood that looked just like this.” Gi-hun replies, “So did I.” They comment that the alleyways look very similar.

Wait a minute, you mean to tell me, the old man was really Gi-Hun’s Father the whole time?? 🤯🤯🤯 pic.twitter.com/7xGALB5aW0

Clue #3 – I’m very confused on the hard facts around this one, but the Internet seems pretty deadset on its importance. During the marble game, the old man asks “Is it the 24th?”. He then explains that his son’s birthday is coming up and that he’d like to get him a present and that he forget his present last year. At the time, all of this seems like the old man is mumbling through a dementia episode. Now flashback to when Gi-hun stole his mom’s ATM card and entered the PIN number, suggesting his daughter’s birthday: “0826”.

So… close enough? In the very last scene of the show, however, Gi-hun declares his birthday is October 31st when calling the number on a new card for the games.

There’s other evidence on the relationship: Like the old man coincidentally being drunk at the grocery store early in the series, before the games are reinstated again. 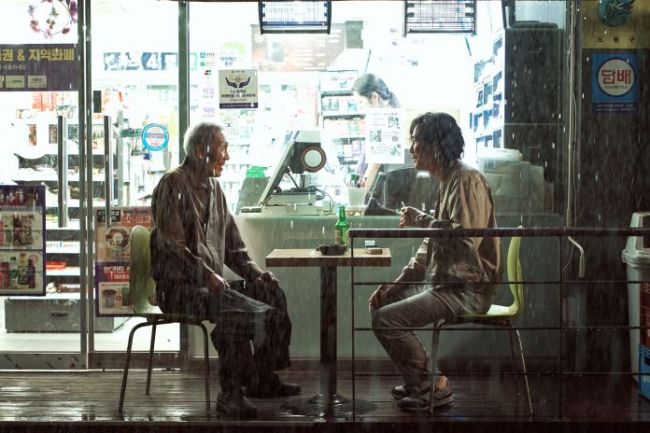 Here’s an elaboration on the father-son fan theory from the Squid Gam sub-Reddit, which is extremely addictive after you finish the show.

Others are poking holes in the theory based on how Gi-hun talked about his father, implying that he’d know, at the very least, what he looked like.

My problem with ll-nam is actually Gi-hun's dad theory is from what Gi-hun talked about his dad, he was around. Not like he never knew him. So there for he would know what his dad looks like and his name.

What do you think? The old man obviously had some wickedness in him. Will more clues be presented that he is, indeed, Gi-hun’s father? Or will the relationship dynamic between both these characters just be irrelevant moving forward?

There are so many questions.