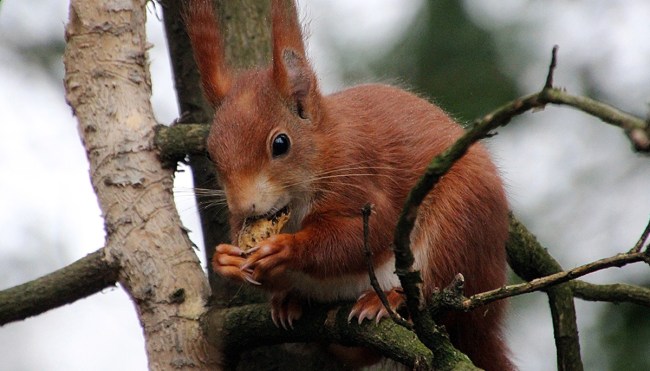 The words “truck nuts” traditionally refer to the objectively hilarious fake scrotums that can be found gracing the hitch of pickup owners who want to tell other drivers they’re the encapsulation of classiness without having to say anything at all.

However, one man in North Dakota recently had an encounter with a decidedly less amusing type of truck nuts—one that resulted in him waging war against a squirrel who geared up for the winter by storing thousands of walnuts inside the body of the Chevy Avalanche parked in his driveway.

According to WSET, Fargo resident Bill Fischer recently opened up the hood of his vehicle and was greeted by the sight of an engine compartment that was overflowing with black walnuts that had been store there by a red squirrel that’s taken up residence in a tree on his property.

After doing a bit more investigating, he discovered that hoard was just the tip of the iceberg, as the squirrel also tucked the walnuts—which are each about the size of a lemon—inside the fenders and basically every other compartment it was able to access.

This story, and more photos, are nuts — literally.

Fischer said he’s had to repeatedly clean out the truck and estimates he’s amassed a collection of around 42 gallons of black walnuts currently sitting in the buckets he’s using to store them himself. However, he says he hasn’t been able to retrieve all of them, as he can hear some nuts rolling around inside the body of the Avalanche when he drives it.

Based on what the Coen Brothers have taught me about how people handle pesky nuisances in North Dakota, this seems like the kind of issue a nice little trap constructed inside a wood chipper could take care of pretty easily.