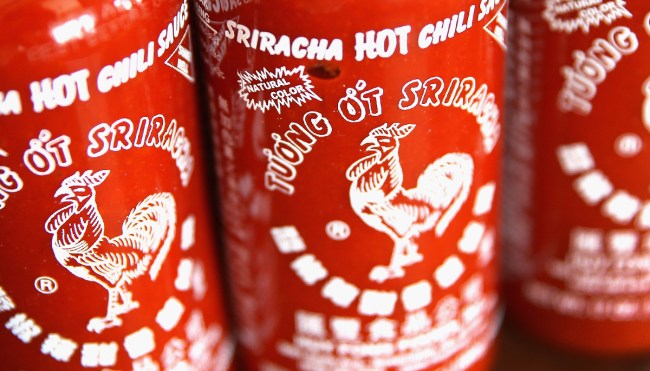 It’s been around a decade since sriracha found itself thrust into the spotlight after the spicy, garlicky concoction that can trace its roots back to Thailand became a veritable sensation around the same time kale and “epic” meals featuring a laughable amount of bacon were also Having A Moment.

The hype may have eventually died down, but by the time it did, sriracha had cemented its status as a staple in the condiment rotation of countless people who regularly use the hot sauce to kick pizza, eggs, and plenty of other foods up a notch.

“Sriracha” is technically a generic term used to define any sauce with its signature flavor profile. However, it’s become essentially synonymous with the product Huy Fong Foods has been pumping out since Vietnam refugee David Tran opened up shop in California in 1980 (many people refer to it as “rooster sauce” thanks to the picture that’s emblazoned on the bottle topped with a signature green spout).

Huy Fong produces over 20 million bottles of sriracha each year, a number that Tran says would be even higher if the company had the resources necessary to meet its demand. However, there are a few factors that limit how much of the sauce it’s able to produce.

That includes the signature hybrid jalapeño peppers that give it its kick, which are now at the center of a growing issue (in both a literal and figurative sense). According to Insider, Huy Fong sent a letter to retailers in April warning a drought in Mexico had created a severe shortage of the peppers it relies on to make sriracha and other products, saying any orders placed after the 19th of that month won’t be fulfilled until after Labor Day.

If you’ve noticed a shortage in your area, it’s only likely to get worse in the coming months, and based on the reactions to the news, sriracha diehards are scrambling to cope with this new reality.

This might be the worst food news all year https://t.co/abkQGggOFQ

I don’t want to alarm anyone, but I just came back from the supermarket and the sriracha shortage is real.

Heard about Sriracha shortage but don’t have time to go to the store cause I’m heading to #CommandFestVegas soon.

Ensuing conversation with my girlfriend: pic.twitter.com/pqcYFSX7SV

this is what fear looks like in a sriracha shortage pic.twitter.com/O6jP49Dptx

My thoughts and prayers go out to everyone affected in these difficult times.