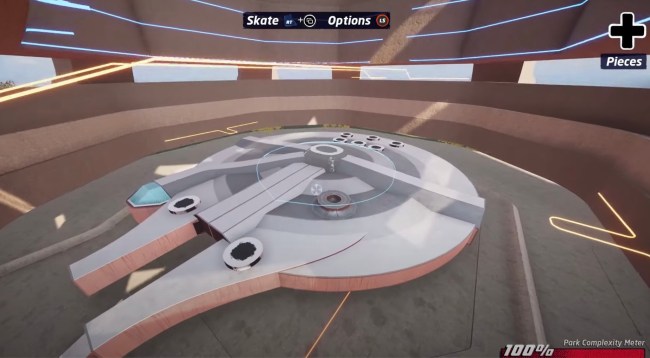 The remastered version of Tony Hawk’s Pro Skater 1 + 2 is one of my biggest highlights of this past year. It’s so much fun to zone out and shred for a couple hours – pure video game escapism. Activision did a remarkable job keeping it true to the original, meaning a whole new generation of gamers can experience what made the game so great back in the day.

The build-a-skatepark feature in the game is pretty big highlight. You can start building right from the start of the game. And now, a couple months after the game’s rollout, some pretty cool custom skateparks are starting to emerge.

For example: This masterpiece by YouTuber Skramblez, modifying the Great Temple on Yavin level on the PC version of Tony Hawk Pro Skater. He built out a Star Wars-themed skate park, complete with a Millennial Falcon as the centerpiece. There’s also a couple X Wing Fighters.

And, of course, he customized his character to look identical to Hans Solo – vest and all – and took him for a gnarly shred sesh through a galaxy far far away.

Tony Hawk fans have to appreciate how skateable this park is – it’s circular, so you can build up some monster combos. Would be fun to drop in, if only the game allowed for such a thing.

“I’ve got a Rad Feeling about this…”