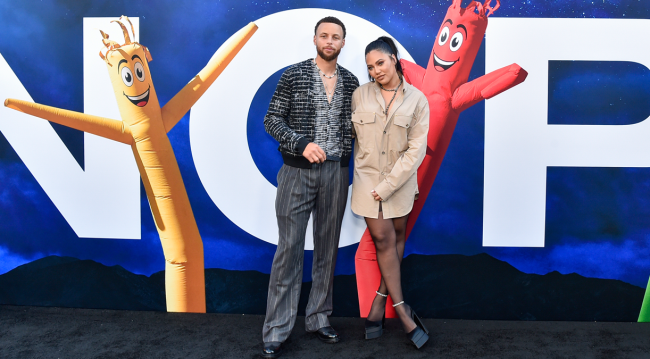 Steph Curry has been taking advantage of his brief downtime now that the basketball season is over and he’s taken home his fourth NBA championship.

He’s been keeping busy with his Underrated Golf Tour, his new Snapchat series Level Up, and has been preparing for a new gig as the host of the 2022 ESPY Awards this week.

Since he was already in Los Angeles this week getting ready for the ESPY’s, Curry hit the red carpet with his wife Ayesha at the world premiere of the film NOPE at the TCL Chinese Theatre in Hollywood this week (PICTURED ABOVE).

It was there that his sartorial decision making came into question by many fans on social media.

When folks were asked by a couple of Twitter accounts to rate Steph Curry’s outfit at the premiere of NOPE from 1 to 10, the two time NBA scoring champion didn’t fare very well.

bro look like he stole Quavos outfit before a music video

Yea she definitely dressed him. Ain’t no damn way!

All I see is a walking bucket and finals MVP . Mans could show up in a sack cloth and I wouldn’t care. Some of these posts are hilarious 😂 though. 4th member of The Bee Gees, & Auditioning for the Jeffersons … I..just 😂🤣😂

Not everyone hated it, of course, but it will certainly be interesting to see what Chef dials up for his hosting gig Thursday night.

Perhaps he got some advice from former ESPY Awards hosts Drake and Peyton Manning, who he contacted before agreeing to do it.

“I texted Drake and Peyton about what their experiences were like,” Curry told The Hollywood Reporter. “They both spoke very highly and positively about it and how much fun they had,” he revealed. “I just wanted to make sure that it wasn’t a ‘Hell no, don’t do it,’ situation. I didn’t get that from either one. It was all very positive and encouraging that it was an opportunity and experience that I would love doing.”

Curry added, “I never in my wildest dreams thought that hosting the ESPYs was going to be an opportunity for me. It’s made me think back to 2008 when I got invited for the first time for breakthrough athlete of the year after our tournament run. Now to think about all the athletes and celebrities that have hosted the show over the years. I don’t know what the answer is to why [I said yes]. It just sounded amazing. I respect the ESPYs and the honor of what the show actually is and I thought it would be a very cool experience to stretch myself a little bit. We’ll see how it goes. I’ll be able to report back on July 21 about how it went.”