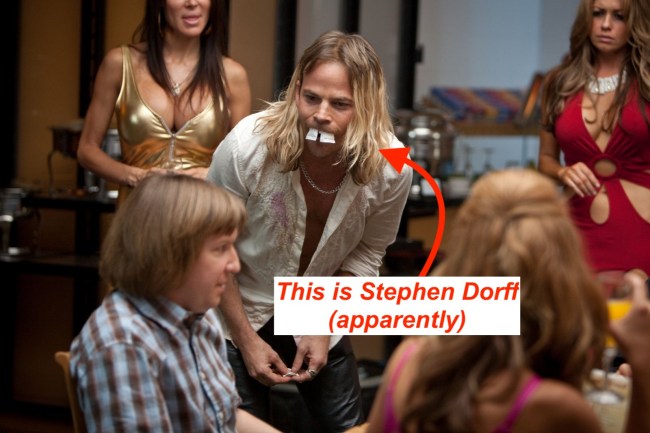 In case you haven’t heard of Stephen Dorff — If you haven’t, shame on you! How dare you disrespect The Dorff like that? — let me catch you up on why this acting titan, this Laurence Olivier of the modern ages, finds himself in the news this week.

During an interview with The Independent, Dorff sounded off on superhero movies, saying that he wouldn’t want to be in a movie like Black Widow and that he thinks Black Widow looks so bad that he’s embarrassed for Scarlett Johansson, the two-time Academy Award nominee who’s become the ninth-highest grossing actor of all-time despite still being just 36-years-old. Yes, for real.

“I still hunt out the good shit because I don’t want to be in Black Widow,” Dorff said.

To be fair to Dorff, I mean… who wouldn’t want to work for the next Stanley Kubrick? That’s certainly an admirable acting goal. Let’s take a peek over at his filmography and see how his hunt for the next great American film auteur is going.

Last year, Dorff starred in a film titled Embattled, which was directed by Nick Sarkisov, a man who doesn’t even have a Wikipedia page. In the years prior, Dorff appeared in films such as Music, War, and Love, Don’t Go, and Life Boat — those, also, have no Wikipedia pages. Maybe start searching a little harder for that next Kubrick, Dorff, because so far it just seems like you’re working with directors who match your movie star status: insignificant.