Steven Spielberg Stepping Down As ‘Indiana Jones 5’ Director, James Mangold In Talks To Take Over 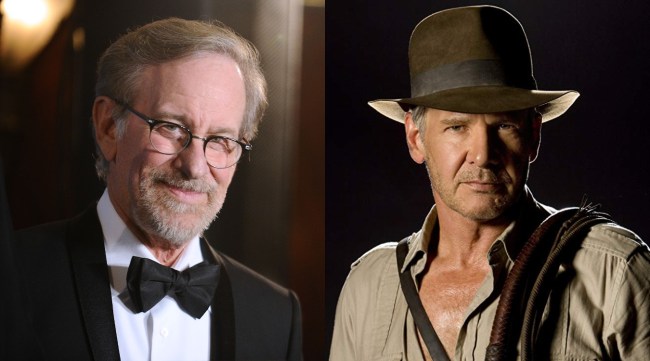 For the first time in the history of the Indiana Jones franchise, iconic director Steven Spielberg will not be at the helm as Variety is reporting that he is stepping down as director and passing directorial duties to Logan and Ford v Ferrari  James Mangold.

Sources say, while a deal hasn’t closed, “Ford v Ferrari” director James Mangold is in talks to take the job. Mangold has been put in this situation before when he took over the “Wolverine” franchise; 2017’s “Logan” was a blockbuster, grossing $619 million globally, and earning Mangold an Oscar nomination for adapted screenplay.

Spielberg will remain as a hands-on producer on “Indy 5.” According to a source close to the filmmaker, the decision to leave the director’s chair was entirely Spielberg’s, in a desire to pass along Indy’s whip to a new generation to bring their perspective to the story. [via Variety]

Massive EXCLUSIVE with @adambvary and @BrentALang : Steven Spielberg is stepping down as director of the INDIANA JONES franchise with James Mangold in talks to replace him. Spielberg will remain as producer and Harrison Ford remains on as Indy https://t.co/1hZRrim4hx

The news of Speilberg’s departure as director comes just a few days after reports indicated that the film’s production was facing “scheduling” issues. Additionally, Ford was also recently asked about the film and subsequently compared it to the Marvel franchise.

“I don’t really want to give them what they want to see, I want to give them something they didn’t anticipate. They are used to a degree of disappointment when you revisit. Certainly, the Marvel movies have made a spectacular example of a success [that] worked the other way around. They killed it! Well, we’re not going to make another Indiana Jones unless we are in a position to kill it. We want it to be the best,” Ford said. [via HeyUGuys]