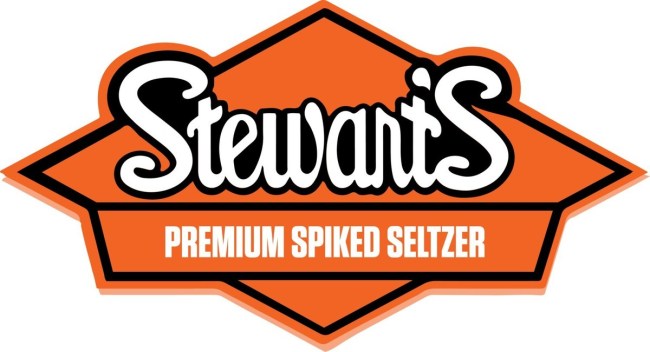 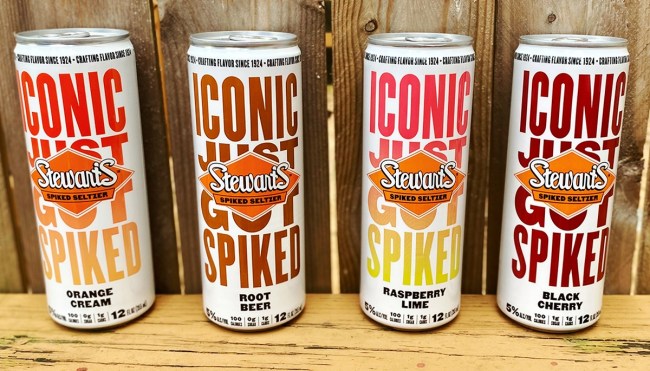 Back in 2019, the drinking landscape experienced the seismic shift that accompanied the Hard Seltzer Boom Heard Around the World, and it soon became impossible to ignore the bubbly booze that exploded in popularity thanks to a meteoric rise of virtually unprecedented proportions.

It was hard not to be caught a bit off guard by the hard seltzer hysteria that swept across America seemingly overnight— especially when you consider there were a few fairly notable brands who’d spent years attempting to navigate the carbonated waters of a space that appeared to be on the verge of going flat until the tides suddenly turned.

Those who’d already staked a claim may have had a head start, but it didn’t take long for the hard seltzer frontier to get absolutely overrun by the countless prospectors that harnessed a wide variety of strategies in the hopes of striking gold. It’s been around two years since that bonanza kicked off, and while there’s been plenty of speculation the boom has given way to a bust, I can confidently say there is definitely still some gold up in them there hills after trying Stewart’s Spiked Seltzer. 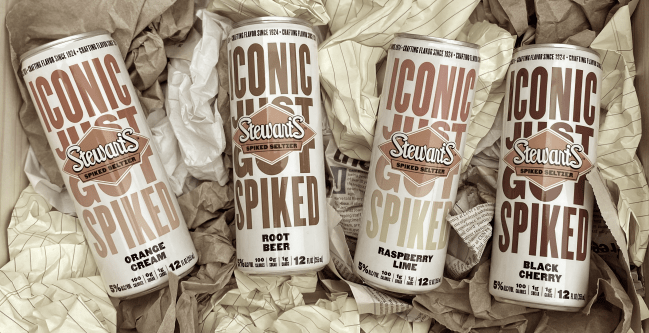 Now, you could technically view Stewart’s Spiked Seltzer as one of the newer kids on the block. However, I’d argue it’d be downright disrespectful to mention it in the same breath as the countless products that were hastily whipped up by the gentrifiers that probably had to search “how do you make seltzer” while scrambling to get a piece of the action. Stewart’s Spiked Seltzer is really almost a century in the making, and that reality is reflected in every single sip.

How so? Well, travel with me, if you will, back to 1924. We’re in Mansfield, Ohio and a schoolteacher in search of a side hustle has opened up Stewart’s Drive-In, a place where flappers can park the “automobiles” that have become all the rage and recover from a fierce night of doing the Charleston with the help of the only two items served up: root beer and popcorn.

It may have been about as barebones as a business plan can be, but it was also built on the back of the secret root beer recipe that helped Stewart’s transform from a tiny roadside stand to a flourishing operation with dozens of locations serving up the signature sodas that eventually joined the restaurant’s flagship on the menu.

Stewart’s has spent almost 100 years mastering the art of soft drinks, so while focusing on something a little bit harder wasn’t a huge leap, it was also a somewhat risky move when you consider the expectations that accompany that kind of reputation. However, I can confidently say every variety of Stewart’s Spiked Seltzer I tried easily surpassed the high bar that’s been set—and it might have been set even higher thanks to these drinks. 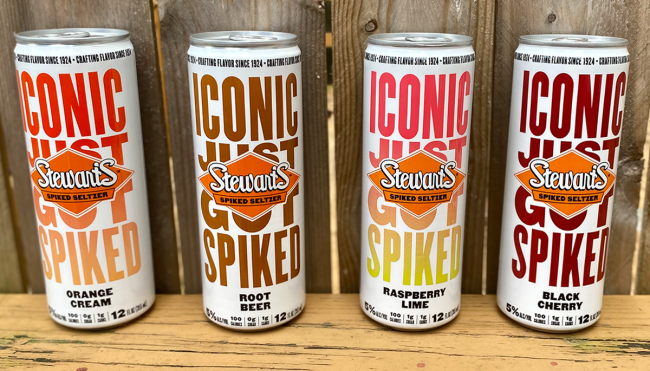 Before diving into what sets each flavor apart, let’s quickly address the traits they share.

Each can of Stewart’s Spiked Seltzer is filled with 12 oz. of sparkling goodness, which sports a 5% ABV, 100 calories, and a single carb per serving. That’s about par for the course when it comes to your typical hard seltzer, but the same cannot be said for the taste, as this foursome 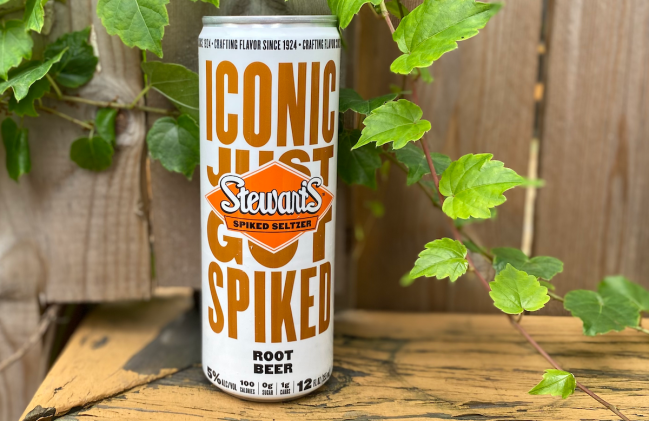 There was no better way to set the tone for this entire taste test than to kick things off with what I believe is the first root beer-flavored hard seltzer I’ve encountered in the wild.

The creation of this variety was as bold as it was necessary; Stewart’s obviously wanted to pay homage to the drink that made it famous, but in doing so, it had to take a great amount of care to avoid tarnishing the legacy of the man who perfected the formula it’s based on. That’s an especially tricky task when you consider the decision to go the spiked seltzer route instead of trying to make boozy root beer “a thing” again; after all, “watery soda that tastes like the idea of root beer” isn’t a description that’s going to draw a lot of people in.

Thankfully, Stewart’s managed to pull this off better than I could’ve ever imagined. It might not pack the same punch as real, actual root beer, but you’ll still be greeted by an authentic and unmistakable flavor each and every time you take a sip. It’s also a significant upgrade from the bottles of concentrated sadness traditionally marketed as “diet root beer,” as I’d opt for one of these every single time over its zero-calorie counterpart even if it wasn’t spiked. 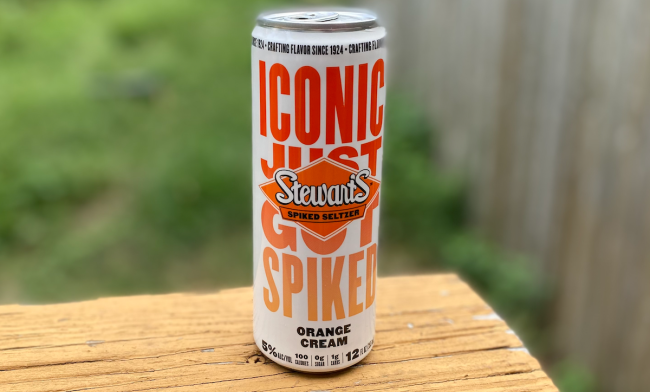 Man, this is just 12 ounces of spiked nostalgia and it is absolutely delightful.

As was the case with the root beer, you’re not going to confuse this with the delicious elixir that is Stewart’s Orange ‘n Creme Soda. With that said, I almost prefer this interpretation of the undisputed G.O.A.T. of frozen treats on a stick.

The Orange Cream variety is sweet without being too sweet. and while the refreshingly natural orange flavor definitely shines, it’s playing second fiddle to the cream that serves as the real star of the show. The only real downside is that I consumed the contents of the can far quicker than I had planned to, which really says more about it than I can. 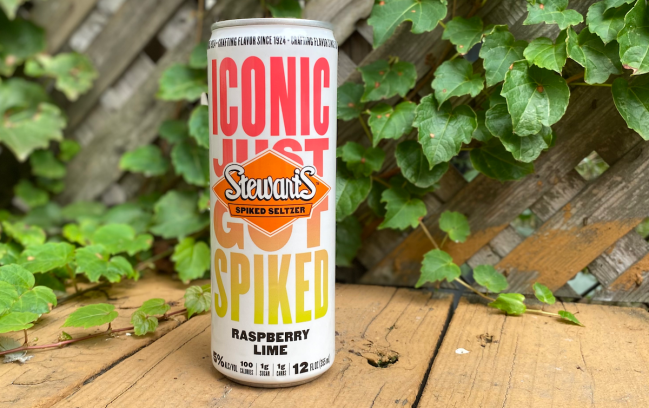 The novel nature of the first two flavors made them inherently intriguing, but I can’t say I was clamoring to pop open the can containing this particular combination. Sure, there’s a reason raspberry and lime are longtime partners in crime, but the tried-and-true nature of the duo doesn’t make it any less tired.

Thankfully, Stewart’s has given it the kind of wake-up call you can only get when there’s a hyperactive toddler holding a mug of scalding liquid involved.

The lime is really the highlight, as I don’t think I’ve ever had a seltzer that comes close to matching the brightness and tartness showcased here; it almost made me wonder if I’d added a squeeze from a fresh wedge and somehow managed to forget. We’d also be doing the raspberry a disservice if we don’t give it the props it’s due, as the flavor is just as natural and plays the kind of supporting role that would net it multiple nominations if we lived in a world where hard seltzers had awards shows. 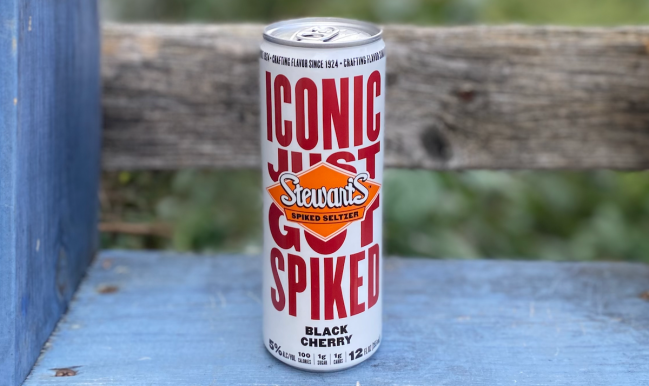 There are certain foods and flavors that I dread encountering while conducting reviews to a point where I’ll consider outsourcing the task to someone else. Black Cherry has historically been one of those, so the fact that I not only tolerated this but (dare I say) enjoyed it should really tell you all you need to know.

Once again, Stewart’s sets itself apart from the rest of the pack by focusing on a robust flavor that actually tastes like the fruit on the label. If you’ve been on the hunt for the rare black cherry hard seltzer that doesn’t make you feel like you’re sipping from a can of fizzy cough syrup, you’ll want to track this one down.