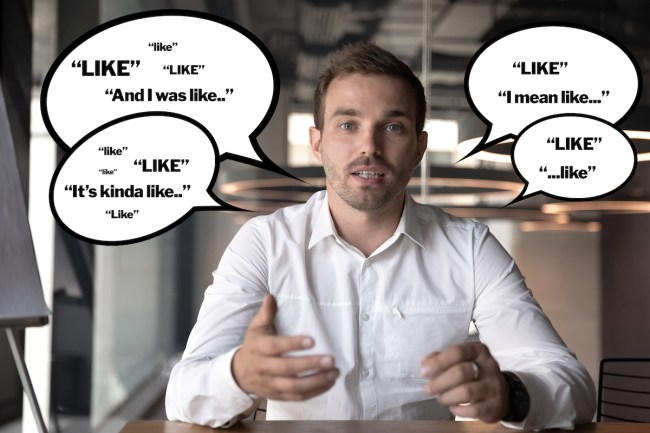 My overuse of the word like didn’t become apparent until launching two podcasts and being responsible for editing those podcasts.

The word like didn’t register during the course of conversation and sounds better than “ummm” in almost every situation.

Watching, listening, and editing those hour-long conversations was a slap in the face to the reality that the word “like” was a huge crutch when trying to ask a question or even get a point across.

I know I’m not, like, the only person with this problem.

In an attempt to erase the word like from my vocabulary – or at the very least stop saying it so damn much during podcasts and interviews – I did some research on the ways to stop using the adverb for no other reason than to stall for time until a true thought pops into my head.

If you want to get deep into the subject, The Atlantic did a thorough job of breaking down the linguistic evolution of the word “like.”

The TL;DR version of the article is that the word like grew in popularity thanks to Jack Kerouac and his Beatnik buddies.

So today’s like did not spring mysteriously from a crowd on the margins of unusual mind-set and then somehow jump the rails from them into the general population.

The seeds of the modern like lay among ordinary people; the Beatniks may not even have played a significant role in what happened later.

The point is that like transformed from something occasional into something more regular.

So why would a person want to stop saying like?

Well, I’ll only speak for myself in this situation, but maybe some of my reasons will resonate.

First, it makes me sound dumb, and I know I’m not dumb.

Second, it makes my questions and answers way longer than they have to be because I’m adding an extra word just to collect my thoughts.

And finally, it makes me sound dumb.

Here are me, Nick Dimengo, and my friend Don dropping L-bombs during a podcast.

Here’s how to eliminate the dreaded L-word from your vocabulary.

Slow The Hell Down

I’m a fast talker. I’ve always been a fast talker. I distinctly remember on car rides home with my uncle – who at the time was old enough to be my grandfather – to “annunciate my words.” He would even exaggerate the word “a-NUN-cee-ate” to hammer home his point.

If you’re unsure if you’re a fast talker, ask yourself this question – “do people constantly ask me to repeat myself?” If so, either you talk fast or they’re all slightly deaf. Which sounds more plausible?

According to Psychology Today, there are quite a few reasons a person uses a quick cadence to talk and I fall into three of the four categories.

I’m trying to keep up with my thoughts, which often leave my head the moment after I think them into existence, I’m trying to get my part of the conversation “over with,” and even though I’m an only child, I always felt the need to get my point across in case no one was listening.

Tell them you want to be called out for it like “yo! You’re talking too damn fast, quick lips!”

Another suggestion is to talk at a slower pace than normal by listening to yourself talk.

Did you ever really LISTEN to yourself talk? Probably not, since your brain is too focused on trying to find the next few words to finish your thoughts.

Try To Catch Yourself

People love those moments of “AH! Caught you!” Well, it’s time to narc yourself out and catch yourself using like.

When you catch yourself using the word in a conversation, be on high alert to not use it again for the rest of the conversation.

If this sounds impossible, but think of the word “like” as a curse word.

There are certain situations where you just shouldn’t curse – at work, in church, in front of strangers or kids – but it’s highly unlikely you enter into this situation with an internal reminder to not drop an F-bomb.

Your brain just sends the message to your mouth “Hey, don’t say anything offensive for the next couple of minutes.”

Going back over the old interviews and podcast conversations brought me to the realization that the word like is often used to replace “said.”

To eliminate like from your conversation, focus on the way you retell stories that contain dialogue.

Do It When You Don’t Have To Do It

My reason for eliminating like from my vocabulary is to sound more professional on my podcast.

If I want to sound more professional during in one part of my life, it’s easier to eliminate the habit from my life completely, than to try some “on/off” switch.

If you’re trying to get in shape, you’re not going to be strict about eating when home but allow yourself to eat like a pig when you’re out. You’ll never see any progress.

You’ve got to stop saying the word in casual conversation in order to eliminate the word like in a professional setting.

Once again, ask friends or family to point out every time you’re dropping like into a conversation, or record your phone or Zoom conversations for learning purposes.

I’ve tried to incorporate these ideas when doing interviews and I’m getting a little better each time.

Is Jacksonville the actual worst town @ScorpioSky has ever been in?