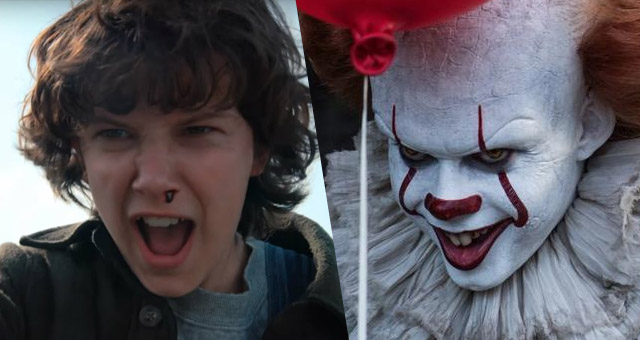 The Duffer Brothers have made it no secret that there are oodles of references, hidden and otherwise, to movies, shows, games and books from the 1980s sprinkled throughout Stranger Things.

It’s also no secret that Stephen King has seen a lot of those references and thought that they looked pretty familiar.

So would it be any surprise to discover that Stranger Things season two has some references to the horror movie of the moment (and Stephen King book from the 1980s) IT? And we’re not just talking about the fact that Finn Wolfhard is in both films.

Finn Wolfhard says the same line in both #StrangerThings and the movie IT pic.twitter.com/70RvYf1AwG

I mean, how many of you, like me, look at Mike, Will, Dustin and the gang and think “Losers Club”?

And what about Bob? No, not the Bill Murray movie. I’m talking about the character, Bob the Brain?

Bob’s parents are from Maine, and he was haunted by an evil clown when he was a kid which would’ve been in the late 50’s #StrangerThings pic.twitter.com/G1SfJiCHRd

Interesting, right? Well, hang on because…

He also found victory over the clown when he stopped showing fear. #Parallels

And when he imitates the clown saying, “hey kid you want a balloon?” it is very close to how Pennywise sounds

If you ever want to see mikey from the goonies kiss lydia from beetlejuice watch #StrangersThings2 lol pic.twitter.com/RROgLIO4hk