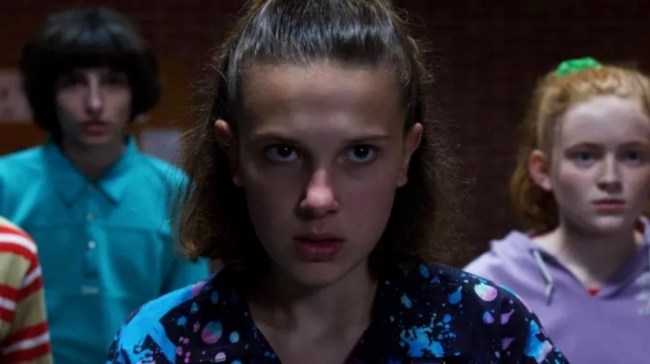 Since it will probably be another two damn years before we get to watch the next season of Stranger Things, and with Game of Thrones and Avengers: Infinity War in the books, fans now have a lot of time on their hands to come up with new theories about what’s going to happen next in season four of the hit Netflix series.

As we nurse our wounds, and continue to blame Dustin’s stupid girlfriend for the deaths of two key characters, speculation has already begun about what is going to happen the next time we see Eleven and the gang.

One fan theory that has already sprouted up, and I am 1,000 percent hoping comes true, is that Eleven somehow causes the Chernobyl nuclear disaster with her powers in season four.

Another excellent fan theory that I can also get behind sees Eleven go from our naive hero to the big bad villain in season four.

How could that possibly happen? It’s really not that difficult to see once you hear what Reddit user weedmonkey666 has to say about it.

As he points out…

• We already know from previous seasons, especially season three, that the Mind Flayer has been going HAM trying to get Eleven under its control.

• We have also seen the Mind Flayer take over the bodies of Will Byers and Max’s brother Billy, so we know it has that ability.

• We saw Eleven get attacked by the Mind Flayer in season four, opening up a nasty wound in her leg – a wound that required her and Jonathan, Mike to gruesomely remove the same type of slug that infected Will that was lodged in her leg.

Note how El’s leg is beginning to look similar to Billy’s arm in the shower scene.

Take it away, weedmonkey666… [I cleaned up the punctuation, etc.]

In the past seasons, especially season 3, we have so heavily relied on Eleven to defeat any monster the characters have to deal with. At the end of season 2, she closes the gate but in season 3 we obviously see that the gate was able to be opened again. I would find it disappointing to see the writers continuing to use Eleven to solve all the issues in season 4 when previous attempts have failed. To have another enemy to defeat and another problem to solve would be much more entertaining.

If Eleven is infected, the Mind Flayer could control her like it did with Billy, Will and the flayed, to eventually destroy her or use her to get more control/spread.

We already know a gate is still open somewhere in Russia and they have captured a demodog so it’s conceivable that the Mind Flayer still has some evil juice left.

Now mix that theory in with the fact that Stranger Things creators Ross and Matt Duffer have already said about season four, “We’re pretty excited about where it’s potentially going to go. Again, like we said, it’s going to feel very different than this season. But I think that’s the right thing to do and I think it’ll be exciting.”

Eleven as the new villain in season four would definitely “feel very different.”