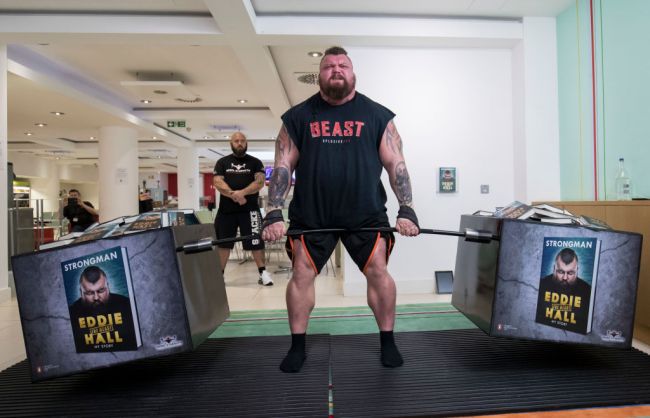 Former World’s Strongest Man winner Eddie Hall is gearing up for his boxing match against fellow strongman Hafþór ‘Thor’ Björnsson and doesn’t look like someone you’d want to step into the ring next to. This all stems back to May, when Björnsson beat Hall’s three-year world record with a deadlift of 501kg in his home gym in Iceland. Hall immediately questioned the legitimacy of the event and the two have gone back and forth on social media in the weeks after, which ultimately resulted in Björnsson challenging Hall to a fight.

“Eddie, I know I just knocked out your record,” Björnsson said. “Now I’m ready to knock you out in the ring. Time to put your fists where your big mouth is and sign the contract.”

The contract will see the two strongman rivals go punch-for-punch in the “Heaviest Boxing Match in History” in Sept. of 2021. To get ready to step into the ring, Hall has been working to ready himself for the heavyweight bout. In his most recent video, he showcased the power he can pack into his punches and left his trainer hanging over the ropes, gasping for air and coughing up blood.

The trainer is wearing a massive padded bodybag and still got rocked. The video resumes one week later after the trainer had been to the doctor, and both he and Hall said that the video makes it seem a lot worse than it was. Even still, his trainer is waiting 21 days to get back in the ring. Probably for the best.