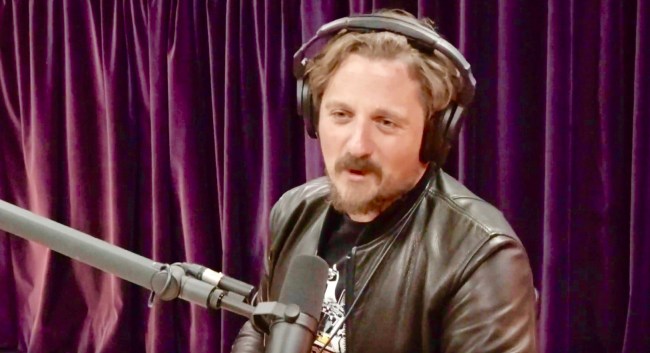 Last Friday, Simpson dropped his fourth album, Sound & Fury, to instant critical praise. Sound & Fury is an album that will wreck you if you love rock ‘n roll; real rock n’ roll, not some bland, cookie-cutter bubble gum produced in a sound-lab for Target commercials. It’s made to be played at full volume through a vintage set of speakers – a gritty, psychedelic blues rock odyssey, harkening back to the days of wood-paneled basements and Pink Floyd acids trips.

Following an intimate show at West Hollywood’s Troubadour nightclub on Sunday night, Simpson went on the Joe Rogan Experience with his band to talk about the album and the various stages of his music career.

Things got heavy, however, when Sturgill Simpson told Joe Rogan a story about two terrifying home invasions at his residence in Nashville.

The former railroad worker-turned-singer/songwriter experienced two home invasions within 36 hours at his home – One in the early morning hours (“about 2:30, 3AM”) while his wife and kids were sleeping, one a day later in broad daylight when the same burglar broke into his house while Simpson was home alone.

Simpson explains that the home invasions really made him think about himself and the human condition, including that he “found out I’m not a psychopath… it was very reassuring.”

Still, Sturgill Simpson’s home invasion story is pretty scary. Watch + listen here, or on the latest episode of the JRE podcast in its entirety.

The first time, the invader was deterred by a growl from his dog. The second time, Simpson drew a gun on the burglar, staring him down within the sights of the firearm.

Here’s how Simpson recalled his harrowing home invasion story to Joe Rogan, in Simpson’s own words:

We had two home invasions within 36 hours. I guess the first time the guy came in in the middle night – about 2:30, 3:00 AM.  The backdoor had the sensor on and it made a very signature noise. If you live in your house, you know the noises in your house. For whatever reason it, just woke me up from a dead sleep. I knew what I heard and there’s only thing that would make that noise, so I kind of snaked my way out the hall and down to the top of the stairs.

When I hit the top of the stairs, I heard the dog growl and the door closed back so I knew that was somebody leaving. We have a huge f*cking dog. He’s basically useless, but he did growl and he made a very primitive noise. I was proud of him and the guy didn’t come in because of that.

I still went downstairs kind of swept the ground floor to see that he was gone. I didn’t want to freak my wife out so I waited to the morning to tell her and then we called police. Of course, one of the neighbors got him on a ring cam in the back alley. We saw the guy leaving and going down the street so I had a very clear view of him.

For whatever reason my wife and the kids they had to go on down to where we actually live. I was working that week in Nashville – probably mixing a record or something so I just stayed behind.

As a result of me being home alone that day, I was cleaning and working on a firearm I’d recently purchased and assembled.  I went to bed that night and locked everything up. Because they weren’t home, I put the gun on the floor on a padded case next to the bed .

The next morning – it’s like 7:15 AM. The sun is shining, my neighbor is going to work and I hear the back door open again. I was like “what the f*ck? That the maid? Who would be here that early?”

I guess out of paranoia or whatever reason I grabbed that gun and just went to the top of the stairs to look. I still think it’s the maid and when I hit the top of stairs and looked down the staircase – It’s the same guy, same clothes just standing in my living room rolling the cord up on my headphones.

I was almost impressed that he came back.

So I started down the stairs on him very quietly and I got about halfway down by the time he like turned and saw me.

I was looking through at his f*cking head through a red dot like a video game.

I’ll never forget that image of this guy, like probably thinking he’s about to die.

The back door was thankfully still open.

The only thing I said to him was “what are we doing here man?”

Instant chills imagining Sturgill Simpson with a gun in his hand confronting a man who just broke into his home. If you’re familiar with Simpon’s outlaw country demeanor, it almost sounds like a scene from a Clint Eastwood movie.

Without a doubt the place to be in Los Angeles tonight. @Bcmcclain hooked it the hell up. pic.twitter.com/3S6kZxgCWq

Incredibly, Simpson remained remarkably cool under pressure and didn’t open fire on the invader. He continues to Rogan:

I hit him with a strobe, which kind of like probably to his brain was he thought was the gun going off because he kind of had a seizure and then I saw the adrenaline spike. He turned, went out the back door, and jumped clean off my f*cking porch – never hit a single step and ran at the back gate. He had latched it. so he hit that back gate on a dead run – just like blew it the hell off, latches and wood splinters flying – and then took off down the alley.

Simpson goes on to explain how cops asked him why he didn’t shoot him, even though he had every legal right to as an invader in his home.

Going down the stairs, you would not believe how much shit can go through your head in like four seconds. I had this whole conversation with myself. Like “my wife and kids aren’t here, you don’t know this guy, this guy doesn’t even know I’m here. Yet I’m holding a f*cking assault rifle and he’s not a threat to me but if I put one through his dome – which I have every legal right to do right now – there’s gonna be news vans on my lawn, this is gonna be on your f*cking Wikipedia page…”

The burglar was caught doing the same thing a few houses later the next day. When charges were filed, Simpson was subpoenaed to testify in court at the trial against the man. All in all, he invaded 13-some homes, looking at at-least a couple years in prison on aggravated burglary charges.

Despite the personal impact, Simpson is surprisingly empathetic about the burglar’s down-and-out brokenness that left him to resort to a life of crime.

“No direction, probably no discipline, no guidance, no heroes. I struggled with that. I was like – ‘Man, what if I gave him a job?'”

What an awful ordeal to go through. Wild that cooler heads prevailed and justice was still served via the system.