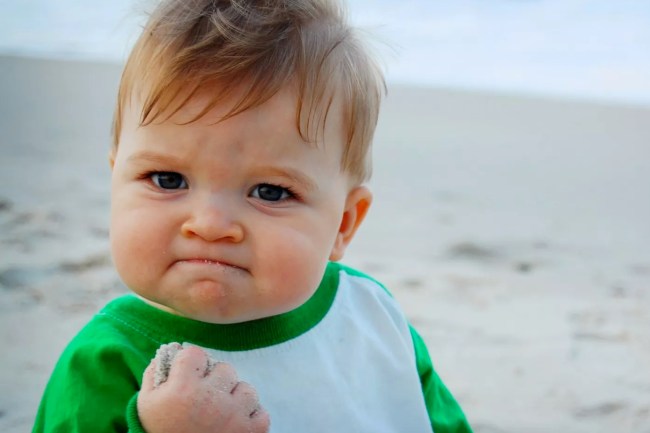 Everyone knows “Success Kid” but people probably don’t know how becoming one of the world’s most popular memes has changed the lives of an entire family.

Sam and his parents went to the beach for the day and his mom just bought a brand new camera. Sam was about to ingest a handful of sand – like most babies do – and before stopping little Sam, mom snapped the legendary shot.

“I thought it was a really cute picture,” recalls Sam’s mom, Laney. “I had no idea how profoundly it would affect our lives.”

His parents forgot all about the photo until mom noticed the photo popping up randomly online. One photo had another baby in the background standing in a pile of sand with the caption “I hate Sandcastle” and another just read “Imma fuck you up.”

Sam admits he has mixed feelings about his fame and “success.”

“We had no idea what memes were because they were so new,” explains Sam’s dad, Justin.

Sam’s parents realized it was already too late to take the picture back. “The internet had it,” joked Sam’s mom.

About a year later, baby Sam popped up as a meme labeled “Success Kid”, and Sam’s mom “prayed” this version of the meme stuck.

While Sam’s family made no money off the photo, the Success Kid meme did end up saving Justin’s life.

From Sam’s amazing art to dad’s fight with chronic kidney disease, the family’s story is a roller coaster and a must-watch.